On Saturday, I decided to mix up yet another batch of homemade ice cream. I made one of our favorites --  a homemade version of Ben & Jerry's Cherry Garcia.

Later in the evening, Brett got emergency alerts on his cell phone. Apparently, a tornado warning was in effect for our area. Last year, we lived through an earthquake (in Virginia!) and a hurricane. However, this was our first tornado warning. Since we don't have a basement (nor do any of our neighbors) and all of our rooms have windows, we just hunkered down in the hallway. What do you do during a tornado warning? Well, we ate Cherry Garcia ice cream. If the power went out, we didn't want this ice cream to go to waste! Thankfully, the storm passed without serious incident, but I think that I will always think of tornado warnings when I think of Cherry Garcia. 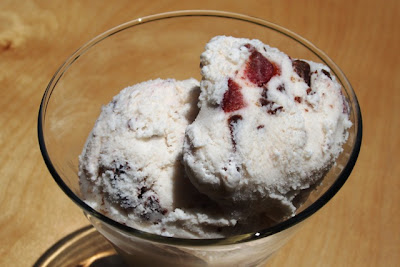 This recipe is an adaptation from one in the Ben & Jerry's Homemade Ice Cream & Dessert Book. Most of the recipes in this cookbook contain raw eggs. I just don't feel comfortable using raw eggs in my ice cream, so I adjusted it a little bit. I also added some cherry extract to bump up the cherry flavor a bit. Because I don't like chocolate getting stuck in my teeth, I used the "magic shell" technique as I did in my Toffee Dream Ice Cream instead of chocolate chunks. The result? Delicious.

Cherry Garcia Ice Cream, My Way
2 eggs*
1 1/2 cups half-and-half
3/4 cup sugar
1 1/2 cups heavy cream
2 teaspoons cherry extract (I used Watkins)
1 Tablespoon coconut oil
3 Tablespoons chocolate chips
1/4 cup fresh or frozen cherries (pitted, halved or quartered, and chilled)
*Egg-Free Option: Of course, you don't need to use the eggs if you don't want to. It won't be quite as creamy, but it will still be delicious. Actually, Brett prefers it without the egg. The other bonus of the egg-free version is that it's faster to make. Just dissolve the sugar in the half-and-half. Add the heavy cream and cherry extract. You don't have to chill it as long as your ingredients are still pretty cold. Just put it in the ice cream machine right away, and add the cherry and chocolate in the last few minutes.