This blog is called "Life with Lucie & Ella." However, there would be no such life to blog about if it weren't for one very special man. Next Thursday will be the 10th anniversary of our wedding day. TEN YEARS! Wow, it has gone fast. 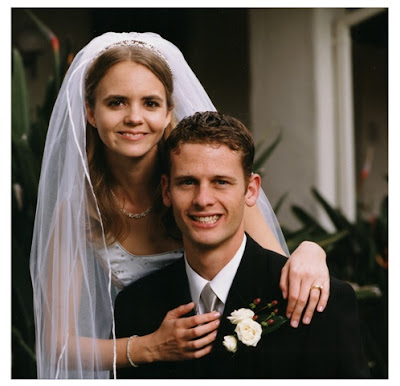 When our first anniversary was upon us, we decided to forgo buying each other gifts for our anniversaries. Instead we decided to buy something together. That first year, we borrowed my brother-in-laws Honda S-2000 convertible and cruised up the coast for a weekend at The J. Patrick House Bed & Breakfast. While in Cambria, we purchased our first piece of art that wasn't a poster. The following year, we bought our condo just a couple of weeks before our anniversary. And well, I guess it counted as our "anniversary gift" for the next several years because we dropped the practice. Instead, we usually just try to go out for a nice dinner to celebrate.

However, my hubby manages to surprise me every now and then. For our 5th anniversary, he broke the "rule" and bought me a beautiful wooden jewelry box. And this year? Well, he's starting early! Last night he presented me with a lovely letter (that made me cry) and introduced the ten days of gifts that are to come. But, they aren't just gifts...each gift symbolizes one of our years of marriage. Let's just say, I am really looking forward to the next nine days!

So of course, I'm not sure how to top his plans! I've booked a sitter so we can go out, and I did buy him something nice. If I can manage it, I will still try to accomplish the goal I blogged about earlier in the year. But, I'm open to other ideas. Anyone else got any brilliant ideas on how to make a 10th anniversary special?
Posted by Janel at 2:16 PM

That's wonderful! 10 years is so excited isn't it?

10? How can it be? Time flies! Love you guys. Love the wedding pic. You were such a beautiful bride!!!