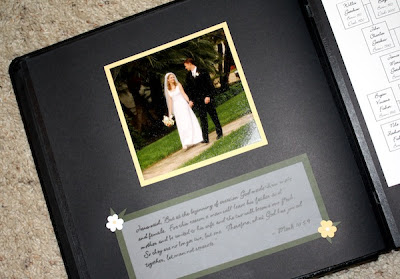 Last week, my sister Jessica posed the question, "To scrapbook or not?" It got me to thinking about my albums that are languishing in my bedroom. Once upon a time, I found great joy in scrapbooking. Then, I started dating Brett during my Senior Year in college and scrapbooking fell by the wayside. One of our first "dates" was actually working on a scrapbook for his summer trip to Europe. Believe it or not, that was his idea. I guess he was trying to win me over or something. (In case you were wondering, that album was never finished either. We haven't touched that album since that date. Yikes!)

So, one of my goals this year is to begin to catch up on my scrapbooks. I have several in various states of completion -- France 1997-1998, Wedding, Ella's Baby Album and Lucie's Baby Album. I think that first and foremost, I need to finish my wedding album. I began it in 2001 when I got married. Perhaps I can complete it before we celebrate our first decade of marriage at the end of March. What an anniversary gift that will make! It's funny...when I initially asked Brett if he minded if I made our wedding album instead of leaving it to the photographer, his response was something along the lines of, "Well, as long as we actually get a scrapbook put together." What a patient man!

So, I'm open to tips! Anyone have some great ideas on how to get an album finished?
Posted by Janel at 9:41 AM

Hi, I clicked on over from LifeAsMom.com a while ago and have been enjoying reading about your adventures with your daughters. :)

I have never been into scrapbooking, but I have lots of other craft projects in various stages of completion. My goal this year is to end the year WITHOUT all those half-finished projects lying around! The only strategy I have found that works for me is to schedule the project into my way the same way I would with a project for my college work or a job, and force myself to meet that "deadline" to get the project done. This strategy also makes me realize how much I value the craft work I do, when I think of it in the same terms I would a college or work project.

Hey Elizabeth - thanks for dropping by AND for your suggestion. I really think that is a great idea...and probably the only way that I will actually finish any of those albums. Right now, my main struggle is trying to find enough hours and energy in the day to do what's on my list. But, isn't that every mother's struggle?

I have also found your site through lifeasmom and loved this post about scrapbooking. I am an avid scrapbooker and have found that spending hours locked away in a room,creating lovely pages of memories is not conducive to raising three kids and the running a household. However I got an amazing idea from a friend who also scrapbooks, and she told me to INVOLVE MY KIDS. It sounded a little nutty at first but then she reminded me that kids love stories and while I'm scrapbooking a picture or several related pictures on a page(with their help with stickers and glue), I should tell the kids the stories behind the pictures. My two older kids are 7 and 2 so the pictures that involve them start with "Princess Layla" or "Brave Big Brother" went down the huuuuge slide... and so on. They get a kick out of it. They also love the pics/stories of when me and my husband were dating, family that live far away, tradtions, and family history. They love showing guests and family the books and sharing the stories...It's priceless. And all the while, your creating more memories with your kids.

Monique - That's a great idea too. I think Ella would probably really enjoy helping. She LOVES doing crafts so maybe I'll enlist her help with her baby album. Thanks for the suggestion!