Several months ago, I decided to try out cloth diapering for both environmental and financial reasons. I had a few friends who did it and loved it. So, I bought six bumGenius 3.0 One-Size Cloth Diapers and tried it out. Really, it wasn't as disgusting as one might think and they actually performed really well. But, I didn't commit to go for it and switch to cloth entirely. Why? Well, a few reasons. Brett really wasn't sold on the whole idea and at $18 each it was a significant expense to buy more. (At that point Lucie was using more than 6 diapers/day so my original purchase wasn't enough to get through the day AND I had to wash them every day. It was kinda a pain.) Also, they were significantly bulkier than disposables and I thought they looked a little weird under onesies. I used the cloth occasionally to make my disposable stash last longer, and I still played around with the idea of fully switching to cloth.

After months of being irritated each time I bought disposables, I seriously started considering it again in November. Brett wasn't really changing many diapers anyway so his preference really didn't bother me anymore. Lucie was starting to phase out of onesies so the bulkiness didn't really to seem an issue in my mind. But, realistically, I needed to have at least 12 if I was going to make it feasible to do cloth. When I saw a "Cyber Monday" sale at Cotton Babies, I decided to "go for it." I bought another eight diapers in really cute colors and got a pail liner and was set to go.

When I got the diapers, I was pretty excited. They are pretty darn cute. Supposedly, they should fit Lucie until she is potty trained. So, just for kicks, I had Ella try one on too just so I could see if these will really fit a big girl. It was a pretty funny sight. 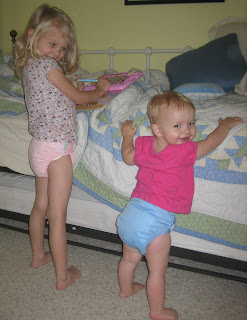 But, it did prove to me that these should last through potty training, I should get my money's worth out of them, and hopefully I should even save a little money too.

After using them for over a month, I've decided that it really isn't that hard. I wash them every other day and have gotten the routine down. Also, amazingly enough, the diaper pail doesn't really smell at all. I just use a little bit of essential oil on the pail liner to cope with what little smell there is. It is NOTHING compared to the whiff I got each time I used the Diaper Genie.

Now if you're a relative of mine reading this post, don't worry. I won't be bringing my dirty cloth diapers to your house. I still plan on using disposables when we go stay with other people. But, when we're at home, I think I'm sticking with cloth.

I too have switched for financial and environmental reasons. I tried three different brands but my favorite is the bum genius. I love them! I am still doing wash every night but will be purchasing a few more shortly to complete my set. I love that Owen can use them until he is potty trained! The girls look pretty cute in their diaps!!

hey friends! It's fun to keep up with you guys through the blog. Funny enough we started using the one-size bg for clara last month and I've been super impressed with them. I really like that they fit Lena too. (Although she's on her way to being diaper free soon. Horray!) I'm slowly building up my stash. What kind of detergent do you use? A couple of my friends buy Country Save on Amazon. I'm looking for the best for the least $. What's your routine?
Hugs to that family of yours!

Kim - Thanks for dropping in! Congratulations on the new baby!

As for detergent, we live in the boonies where it is hard to find additive-free detergent. I was able to find Planet Detergent (recommended by BG and sold on their site) in a local store. It's not cheap (per load) but I use so little of it that one box should last me quite awhile. It is much cheaper at Amazon but you have to buy 10 boxes! I do like that it has Borax in it since it seems to help with the musty smell of my old washer.

I've heard good things about Country Save too. I think it is cheaper than Planet (per load) but our local place sells it for $20/box and I wasn't willing to spend that much money to try it out.

Yay for cloth diapering, I am proud of you for being so persistent in trying it out. Yeah!!! Feel free to shoot me questions if you have any, we have used cloth for all three kid-lets. love them!