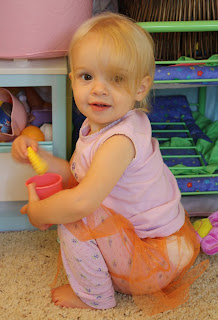 A couple of weeks ago, I was working in the kitchen when Ella came in to see me "in character". Once again, she was pretending that she was a fairy. This time, however, she was not TinkerBell. Instead she decided to be "the bad girl" Vidia. (What is it with my child and wanting to be the baddie?)
Anyway, she totally started reciting Vidia's lines from the movie. I was actually quite impressed...she had memorized the lines pretty accurately. Of course, I can't remember exactly how they go, but suffice it to say that Vidia was explaining that she was a "fast-flying fairy" which is a rare talent. Since Lucie was hanging out with Ella, I asked Ella what "talent" Lucie had. I thought she'd say that Lucie had a "talent" like one of the other characters from the movie (water, garden, light, animal or tinker talent). But no, she decided to keep it more true to life.
"Oh, Lucie is a grabbing-talent fairy because she is always grabbing my things."
Posted by Janel at 11:00 AM