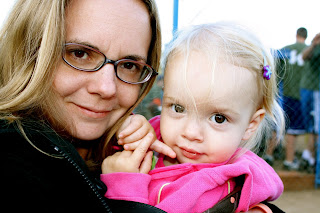 I confess...I'm embarrassed by how long it has been since I last posted on this blog. Yikes! I knew it had been long but I didn't know it had been THAT long! Despite the end of school and the arrival of summer, my life got busier.
In June, we welcomed my brother-in-law Troy, his wife Aimee and their sweet little girl Meli to our town. It is soooo wonderful to have family nearby. Those first couple of weeks after their arrival were full of family dinners and playdates. We're looking forward to many, many more of them!
Then, at the beginning of this month, we headed up to Oregon to visit Brett's recently retired parents as well as his three sisters. We braved the 15-hour drive with two small children (twice) and lived to tell about it. It was a nice two week trip that included lots of hanging out with family as well as a day trip to the Oregon coast, a four-day camping trip and a day trip to the Oregon Museum of Science & Industry. Hopefully, I'll get a chance to post some pics of the trip later.
And now, we're back home, clinging to the last month of vacation and slowly plugging away at the projects on our lists. It's hard to believe that August is nearly here. In the next month, I hope to tackle some cleaning and crafting projects...as well as try to get in better shape (more on that later).
Posted by Janel at 12:54 AM

Great shot!!! Thanks for posting... I was begining to wonder. LOVE YOU

I miss you Jamie! Could you come up for a visit any time soon?