Okay, so I posted the other day that I had some exercise goals and that I'd talk about them more later. Well, I guess I figured that if I posted it online where others could read it, that I would be more apt to follow through. You see, I'm wonderful at making plans...but not always so good at seeing them through.
So, Brett and I have been talking for ages about wanting to get in better shape. But, that's about all that we've done is talk about it. Hopefully, this month we'll do more than talk about it. Hopefully, we'll make it happen. Although we're both slender people and don't necessarily need to lose pounds, we both want to be healthier, have better nutrition and be stronger (I wouldn't mind to have a little muscle either).
And of course, I'd like to lose the jiggle around my middle. After Lucie was born, I managed to drop down to my pre-pregnancy weight, but the pounds don't look quite the way they used to on my body! I've tried off and on to do some ab work but really the only way to get rid of that is cardio. Cardio, hmmm...I don't know that I like the sound of that. I used to be a dancer, and I LOVED it! It was exercise that was fun. But, in the 14 years since my dancing days ended, I haven't found anything to replace it. I don't think that I'd stick with going to the gym, and running is absolute torture. So, I've decided to go the workout video route. 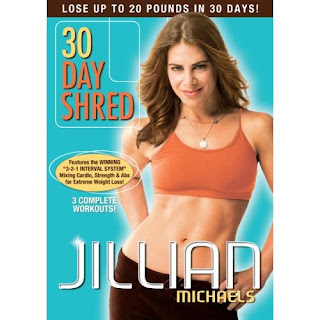 I searched on Amazon for a video that might suit my needs. I came across a video by Jillian Michaels (of The Biggest Loser) called 30 Day Shred. It advertises "Lose up to 20 pounds in 30 days!" Okay, that claim seems a bit outlandish, and I don't need to lose 20 pounds. But it's 4.5 stars (out of 1,285 reviews) were pretty persuasive...and at only $6.50, I thought it was worth a shot. Now, it's not primarily a cardio workout - it blends strengthening, cardio and ab work. But, since I'm so out of shape, I thought it might be better to ease into working out with a 20-minute video that has some cardio than to do a pure cardio workout.
Well, the DVD arrived a couple of days ago, I tried it out and it doesn't feel like I'm easing into anything! Wow, it is challenging. The movements aren't complicated - a lot of them are things that I remember doing in P.E. in elementary school. But, I think that they're very effective because I am feeling the effects of them. Really feeling the effects of them. I'm hoping that I can find time (and energy) every day to workout. I'm hoping that as I continue working out that I'll build some endurance up.
Ultimately, I'd like to:
We shall see what happens...
Posted by Janel at 7:19 PM