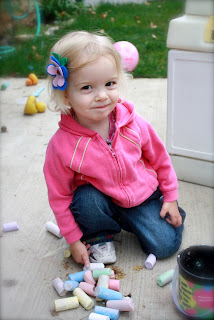 I feel really blessed to have family living on the other end of town...just about a two minute drive away. I also feel really blessed to have a sister-in-law who suggested doing a kid swap with me! On Wednesdays, Lucie goes to her cousin Meli's house for a morning playdate while I get two hours to do whatever. Then, on Fridays, it is my turn to return the favor and have Meli over for a playdate.
Just 6 months apart in age, Meli and Lucie are at a point where they really seem to get along and play well together. Lately, they've been enjoying some time in our backyard. It is so nice to be past that stage of whining and fighting over toys. Well okay, we're not totally over the whining, but they share pretty well together and truly enjoy each other's company. 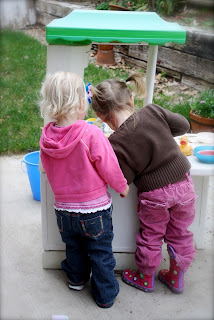 On Monday this week, Lucie said, "I see Meli?" to which I had to reply "No." Their family was out of town for the morning so we weren't able to have a spontaneous playdate. But, this morning, we were scheduled have Meli over. When we were dropping Ella off at preschool, Lucie made up a song, "I see Meli, I see Meli" that she sang in anticipation of picking up Meli next.
I feel very blessed to see my little girl who is on her way to being best friends with her cousin Meli! And, I feel blessed to see Meli's sweet smiling face and pigtails on a regular basis. 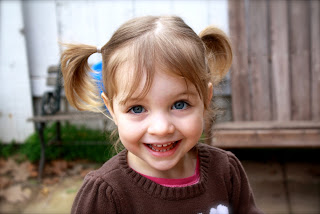