My parents became grandparents over 11 years ago when my sister Jessica had her first son. Then over the next few years, Jessica had another boy, another boy and then another boy. We started to doubt that there would be any granddaughters in the family.
Well, I broke that trend when Ella was born and started a girl streak. Jessica finally had a daughter almost two years ago, and then I had Lucie earlier this year. The "score" was 4-3 until today. Now, it is officially tied! This morning Jessica gave birth to her second sweet baby girl -- after a mere three hours of labor! (Yeah, I'm a little jealous). My lucky sister Jamie got to hold her today since she's visiting and holding down the fort with the other five children. (Yeah, I'm a little jealous of that too). So, all day long I had to wait for a glimpse of the little bundle and had to be content to hear Jamie oooh and ahhh over her over the cell phone. Until now... Jessica just posted a pic of the latest FishBaby on her blog. Isn't she a cutie? 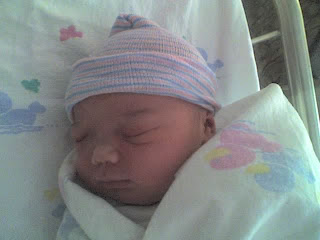 Nah, nah, nah, nah, (tounge sticking out!) Just kidding. I wish you were here. 5 kids is WOW! I cannot find the words. They are great kids. Each one of them is amazing! Eden is super sweet. The most precious little bundle of girlness and she smells so pretty! I took TONS of pictures. I will post once I get them from Walgreens.