Has it been an exhausting week! Things have just been so hectic that I haven't had a chance to blog. I had great plans of finishing my Mermaid Costume posts, but then a little thing called Sandy got in the way.

Last Friday, I realized that I needed to do some preparation for the impending hurricane. We live in an older neighborhood that is notorious for losing power. When Hurricane Irene swept through last year, we were without power for 6 days. I did actually need every bit of those emergency supplies that I picked up in the days before Irene struck. So, I spent last Friday buying supplies, heading to the bank, and filling up my car with gas. Really, I need to get an emergency supply bucket together because I seriously hate hurricane preparedness shopping.

Once I got that checked off, I realized that if I were to lose power, I wouldn't be able to finish the Mermaid Costumes for Halloween. There was no way I was going to finish three costumes by hand! So, I was sewing like a mad woman to get the costumes ready for a Halloween party over the weekend and before the storm made landfall. I. Was. Exhausted. But, on the bright side, my mermaids were beautiful! And, they even won the best costume contest at the party! My girls and their cousin were sooooo excited to win! Don't they make cute (and sassy) mermaids? 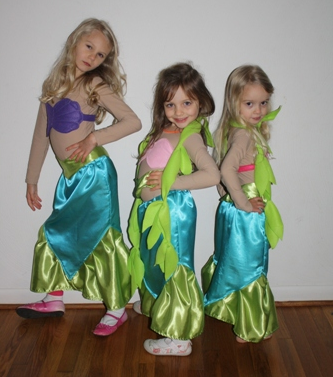 Thankfully, Sandy was very mild here -- just a very consistent rain. For us, it was nothing like Irene. Just a wet day. The girls did stay home from school on Monday and had a late start on Tuesday, but other than that, life was pretty normal.

The rest of the week has been a blur of rain, baking cupcakes for Ella's school party, trick-or-treating, and freezer cooking. Yes, freezer cooking. Prior to the hurricane, I promised my sister that I would test out her Busy Holiday Nights Cooking Plan that features recipes from her new book Not Your Mother's Make-Ahead and Freeze Cookbook. Initially, I had planned to cook over the weekend, but I didn't want to chance losing all of that food with a storm-induced power outage. So, I had to change things up and then do a bit of cooking over several days. I had never done a "once-a-month cooking" session. I've done several freezer meals at a time before, but nothing as extensive as this cooking plan. It's a good thing that I have a freezer full of meals because I don't feel like cook (or cleaning my kitchen) for a very long time! If you're interested in freezer cooking, be sure to stop by Life as MOM and check out Jessica's free downloadable Busy Holiday Nights Cooking Plan. The recipes that I've already eaten have been delicious!
Posted by Janel at 8:34 PM