Yes, yes we survived the earthquake AND Hurricane Irene. It seems a bit much for just one week, doesn't it? Some of my relatives asked me, "What's next? Locusts?" Well, we did have cicadas in the trees...however, it sounds as if their numbers diminished after the hurricane. The number of trees and functioning power poles in the neighborhood were also diminished. 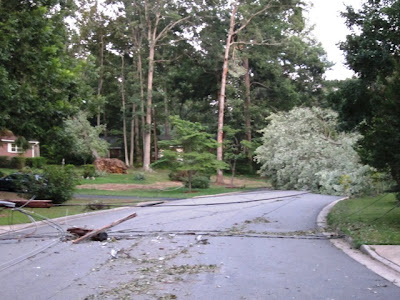 Well, the hurricane was definitely an experience. I awoke to the wind and rain that morning, and it continued all day and throughout the night. We watched the news coverage throughout the day - the coast guard had to save two people from a boat that couldn't make it to land, and a child was killed when a tree crashed into his apartment just 30 minutes away from us. As the day went on, my brother-in-law's home lost power, but ours remained on. We were lulled into a false sense of security. Later that evening, Irene hit our neighborhood hard. We lost power, there were flashes of light outside (which I think came from power lines crashing to the ground), and we heard trees cracking and falling in the property behind our home. It was a bit scary for a bit there. We made the girls sleep in the hallway since a power pole AND a huge pine tree loom right outside of their room. Ella said in her dramatic voice, "Mom, I don't want to live like this!" 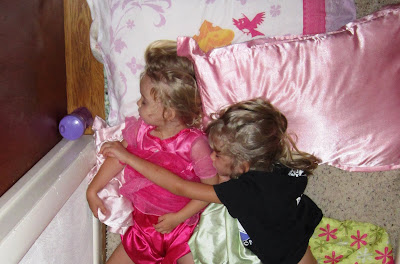 While the girls didn't have to sleep in the hallway for more than the night, we DID have to live without electrical power for 6 nights and 6 days. No TV. No games on PBSKids.org. Bedtime when it got dark. Lots of candles and flashlights. Man, did it get old fast! You don't realize how much you rely on electricity until you don't have it. Since our water heater is electric, our showers and baths were cold, and I had to use the camping stove to heat water to wash the dishes. Evening activities were basically limited to reading by flashlight.