Today is our 10th wedding anniversary! Ten years seemed so far off and now here it is. In honor of our anniversary, I thought I'd post a recipe for our favorite dessert -- Crème Brûlée. It is the one that we nearly always order at a special dinner out. I've tried making it before with some success, most recently for our Valentine's Dinner at home. In my previous trials, I always had to broil the sugar topping which in turn heated up the rest of the custard. It was still yummy, just not quite as good. However, we do not need to broil our Crème Brûlée any longer As part of my ten days of anniversary gifts, Brett gave me some large ramekins and a chef's torch! Of course, he wanted me to make some right away. We didn't have any heavy cream in the house, so I tried it out by using half-and-half instead. Oh my! It was still quite tasty, plus it has the added bonus of being lower in fat. We're still figuring out the best way to use the torch, but you know, practice makes perfect. I think we just might be practicing it a lot in the near future. 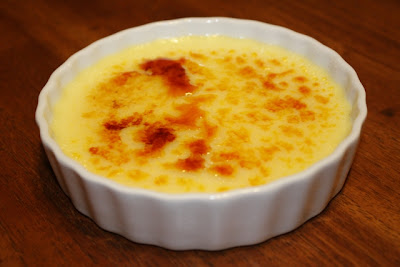