Sickness descended upon our house last week. It wasn't anything too serious - we all managed to function rather normally. However, both of my little girlies looked horrible. Their attitudes and energy levels were fine, but their faces showed their sickness. They both had dark circles under their eyes and noses that ran and ran and ran. As a result, they had such extreme chaffing that they looked as if they had red mustaches. It was so sad. I won't even post a picture here because, well, I'm vain like that. Not only did it look horrible, but it hurt too. Poor little Lucie complained many times, "Mom, my nose is hurting!" in her high-pitched whine. 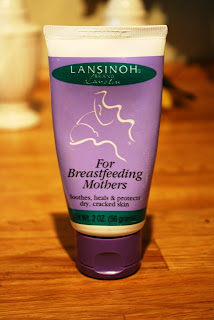 However, I had some "magic stuff" that gave them some relief. Lanolin. Yes, lanolin.  I had a tube leftover from the breastfeeding days and thought it was worth a try. Sure, it's rather sticky going on...and I wouldn't really want my girls walking around in public with it on their faces. But, it worked wonders. I put it on them before naptime and bedtime. It immediately soothed their discomfort, and when they woke up their "mustaches" showed noticable improvement. Of course, the chaffing returned during their waking hours with the return of their runny noses. When her nose started hurting again, Lucie told me, "Mom, I need the magic stuff again."

Yeah, we'll be keeping this "magic stuff" around. It works!
Posted by Janel at 3:00 PM