Back to the long overdue recap of our Spring Break trip to Greece... 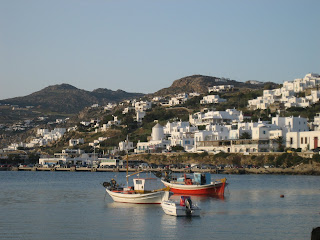 After visiting Athens on Easter Sunday, we woke up bright and early to head on over to the port of Piraeus to get aboard the Louis Lines cruise ship, the Aquamarine. When I began researching our cruise boat prior to the trip, I was a little disconcerted by a few of the news articles about Louis Lines. Just a few weeks prior to our trip, three 26-foot rogue waves hit a Louis Lines cruise ship and killed two people off the coast of Spain. Rogue waves are a rare and not something you can forsee -- just an act of nature. What concerned me more was the fact that Louis Lines had a ship hit a reef off the coast of Santorini and sink in 2007. In fact, it was the same itinerary that we were following. I believe that the cruise line blamed the accident on faulty maps. Of course, I didn't discover this until after the trip was booked by our tour company...not that we could have done anything about it anyway. So, I just told myself that they wouldn't make the same mistake twice and crash into the reef, right?

The afternoon was filled with settling into our cabin, safety drills, and having lunch. We didn't arrive to our first destination -- the island of Mykonos -- until the evening. The sight that awaited us once we docked was beautiful! 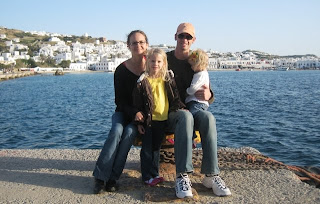 On Mykonos, our time was our own. We had just a few hours to walk into town, eat dinner and explore the many shops that lined the streets. In the first shop we went to, Ella fell in LOVE with a particular necklace. We didn't buy it then since we wanted to see what the other shops offered...but she didn't stop thinking about it all night and worried that we wouldn't find the shop again. We ate dinner a seaside cafe with a lovely view and followed it with a nighttime stroll around the island. 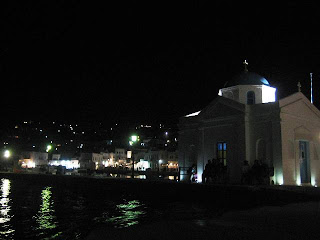 After continuing our search in various shops for a suitable necklace for Ella (no luck), we stopped for some ice cream and headed on our way back to the ship. Of course, we had to find that shop again with the necklace! The saleswoman was charmed by Lucie and Ella and also gave them each a freebie -- a small flower magnet for Lu and a lanyard leftover from the Greek Olympics for Ella. With our souvenirs in hand, we got back on the ship and into bed. The next morning's activities were to begin early as we had two desinations -- the ancient city of Ephesus (in Turkey) and the island of Patmos.
Posted by Janel at 11:00 AM