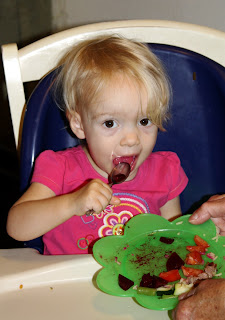 This past weekend, we had a lovely dinner with my father and my in-laws -- Grilled Tri Tip, Mexican Rice, Green Beans, garden fresh zucchini, salad and Crumb Top Apple Pie for dessert. Oh, it was yummy! My mother-in-law Bonnie also brought a contribution to the meal -- BEETS! Now, I've seen my father enjoy them at a salad bar on many occasions, but I've never personally eaten a beet before. There was always something about the hot pink juice it left over everything that it touched that made me a bit wary. 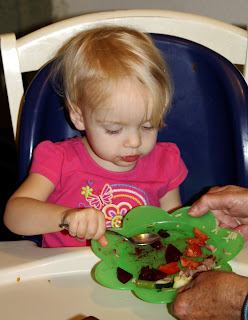 But, my mother-in-law got some fresh homegrown beets earlier this week while she was walking through the Mission. She saw boxes and boxes of fresh produce and wanted to buy some. When she asked the woman how much it was, the woman said "Free!" Apparently, someone delivers fresh produce once or twice a month and just donates it to the Mission to distribute to whoever wants it. So, she ended up with some fresh, just-out-of-the-dirt, beets that she cooked up for us to try. My father enjoyed them, my husband thought that they tasted like dirt and was quite vocal about it and I thought they were okay. The hot pink juice is still a little weird to me. Ella wouldn't touch them...but Lucie? Oh, I think Lucie won Grandma's heart with her response. She ate...and ate...and ate them! She was quite disappointed when we cut her off from the beets. It was the first time that she had ever had them and I didn't want her to overdo it.
Overall, Lucie enjoyed her dinner -- she ate tons of everything. So afterward, I asked her "What was your favorite thing at dinner?"
Her response? "Um, candy." 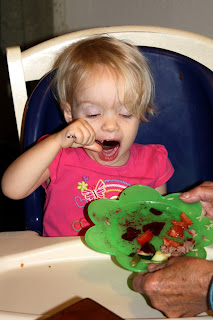