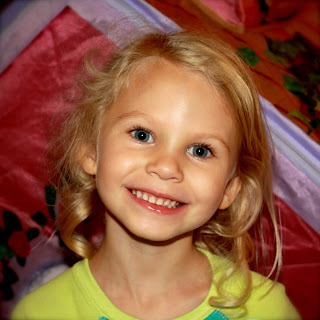 Last Christmas, I decided to buy a Rose Petal Cottage for the girls as a joint Christmas gift. It's just about the girliest of gifts I could imagine - a huge, pink play cottage with roses all over it. My girls loved it just as much as I hoped they would. For the first couple of months, we stored it against the wall in our living room so it was easy to pull out and play with. Then, when I redid the girls' room in April, I cleaned out their closet so that we could store it in there as I had originally planned. I reclaimed my living room, but the cottage didn't get used nearly as frequently. Lately we've had a bunch of playdates and have pulled the cottage out for those occasions. Well, Ella begs me not to put it away, so it usually stays out a few days in a row. 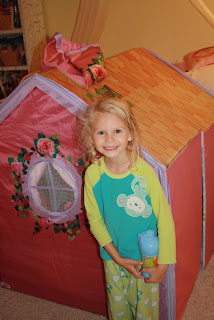 The cottage had been out for a couple of days when we decided that it might be fun if Ella got to sleep inside it. Oh, was she ever excited by the prospect of it! She happily got her "bed" ready inside and climbed inside for the night. 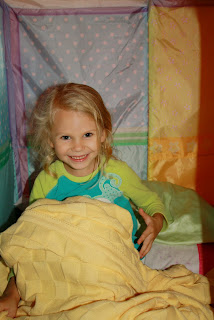 We left her bedroom door propped open as we normally do while we watched TV in the living room. A little while later, Ella climbed out and asked to shut the bedroom door because we were being too loud. Brett, wise to his daughter's shenanigans, commented, "You know, she is just going to play in there now that she's shut the bedroom door." We decided to see what would happen and continued to watch TV for awhile. Finally, we actually started hearing noises from her room so Brett went to investigate. Sure enough, she was playing inside the cottage. What we didn't expect was her dramatic response to being caught!
Brett quickly opened the cottage door and said, "Busted!" Knowing that she had been caught doing something she shouldn't have been doing, Ella started crying. Not just a little fake cry, an honest to goodness cry. She was so upset, she didn't want to sleep in the cottage anymore and decided to move to her bed. It took her a few minutes to calm down and then she finally went to sleep. Although she didn't spend the night in the cottage, she did end up sleeping in there (or so she tells us) when she woke in the early hours of the morning and didn't want to wake us up. 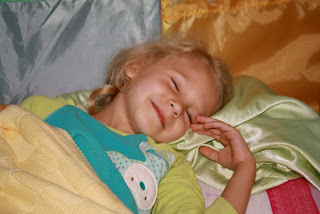