About a year and a half ago, I attempted my first loaf of homemade bread. Oh, was it delicious! Well, I started making it pretty regularly and went through non-stick cooking spray much more quickly than usual. It seemed that cooking spray was one of those things that never really went on that good of a sale...and I always hated throwing away the bottle.

I remembered that I had seen a pump-style cooking spray bottle from Pampered Chef years ago. So, I turned to the internet to find something similar. I came across the Misto Olive Oil Sprayer 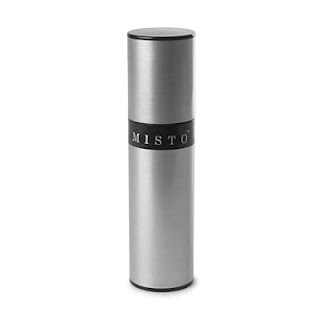 is an aluminum bottle that you fill with any type of cooking oil and then hand-pump to pressurize it. The way I see it, the benefits of it over store-bought spray are:

Overall, I've actually had pretty good success with the Misto. I admit that sometimes on glass pans, the results aren't as fantastic as non-stick cooking spray. But, it hasn't bothered me enough to switch back to store-bought spray. I recommend it!
For other money saving ideas, stop by Life as Mom on Fridays for Jessica's "Frugal Friday" post and links from other money-conscious bloggers.
Posted by Janel at 3:00 PM