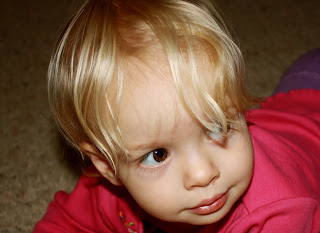 This past weekend, Lucie got her first noticeable busted lip. It's kinda amazing that she's gotten to 21 months of age without having cut her lip noticiably before. I think she's maybe cut the inside of it before, but not the outside.
Ella got hers when she was just over one year old and she still bears the scars today. So, whenever Lucie falls, I worry that she's going to hurt herself badly enough to get scarred or damage a tooth. Thankfully, Lucie's busted lip doesn't appear to be nearly as serious as Ella's was. I was in the kitchen when it happened, but Daddy saw it all unfold. Apparently, Lucie was jumping on the bed with Daddy by her side, jumped into his chest and bit her lip. She also ended up with a scratch near her nose somehow that makes it look worse. But, I'm very thankful that it wasn't too serious and it appears to be healing quickly.
Posted by Janel at 11:59 AM