Because we live a 30-minute drive from major retailers, I like to shop online. It's so much easier than schlepping two kids all over the place. But, on Wednesday of last week, we headed to an actual store so that we could buy some gifts for Brett's birthday. While we were at Target, I saw the Playskool Dream Town Rose Petal Cottage and fell in love with it! 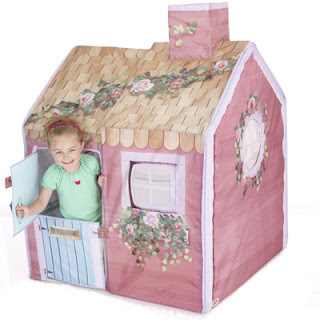 Isn't it cute? The Cottage comes with a little stove and you can buy other accessories like a nursery set, table & chairs, sink and a washing machine. Now that I have two girlies, I feel like I can actually buy girl things and get my money's worth out of it. With a retail of $80, the Cottage seemed cute...but not that cute. Target had it on sale for $65 but that still seemed a bit much to pay. So, I resisted the urge and checked online when I got home. With a few clicks of the mouse, I discovered that Amazon had it for a mere $30! In my mind, $80 is too much...but $30 might be just right. Still, I held off on buying it because I figured, "What's the rush?" and I needed to figure out just where in our 2-bedroom condo we can store the thing. So, I mulled it over for a day and decided that I could get rid of some junk in the girls' closet and store it there. They've designed it nicely so that it is lightweight and easy to move (even for a child) and the pieces all stack inside one another to save space.

So, on Thursday off to Amazon I went to purchase it...or so I thought! Just a mere 24 hours after looking at it online, I discovered that it was no longer $30. Instead it was $60 AND they had raised the price on all of the accessories too! Although it was still cheaper than Target, I just could not justify buying something that doubled in price overnight. Needless to say, I was bummed. You see, I'd already been having visions of the girls getting up on Christmas morning to find it assembled in the living room with a big bow on it! I spent some time reading the product reviews and discovered one shopper had indeed watched Amazon change the price throughout the week. So, the comment gave me hope that maybe, just maybe they would lower the price again. Really, I don't know WHY they would do this but I thought that I'd keep checking. So, I logged on again on Sunday to see the price -- $50! I tried again on Monday morning -- still $50. I tried again Monday afternoon (okay, I was procrastinating from the cleaning I needed to do) and lo and behold -- $34! True it wasn't the original $30, but it was close enough for me. They also lowered the prices on the accessories too. So, I decided to get the Cottage, the Table & Chair set and the Nursery Set. Actually, the three items ended up being CHEAPER than if I had ordered them the previous Wednesday! Weird, huh?

The Cottage will be for both girls and then I'll give an accessory to each one of them either for Christmas or their birthday. (Don't tell...it's a secret!) I really hope that this is something they will enjoy playing with together as Lucie gets a little more mobile in the coming months.
Posted by Janel at 11:00 AM

I want one of those! Do they make a grown up size one? JK. What fun to see your girls enjoy this. Thanks for posting! LOVE LOVE LOVE THE posts. Amen. A prayer has been answered.