Five years ago this past March, we relocated from Santa Barbara because we bought a condo closer to Brett's teaching job. Not only was I excited about homeownership, but I was ecstatic to be that much closer to my sister Jessica and her family. She lived just about an hour and a half north. At the time, she and her husband had three sweet boys -- Nile, Jordan and Calvary. Then, much to my dismay, less than six months after we moved, I got the news that they would be moving...to Kansas! I admit, I didn't even know how far Kansas was...it just seemed far, far away. Apparently, a lot of people don't know where Kansas is, if this mug is any indication: 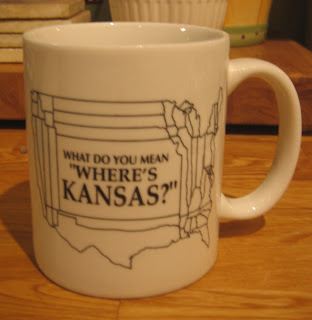 (This was a Christmas gift the year that the FishFam moved to the land of Dorothy.)

So, now it is nearly five years later and both of our lives have changed so much. I'm now a mother of two beautiful little girls, and Jessica & Bryan have added THREE more children to their brood -- Judah (age 4), Cana (1 1/2) and new Baby Eden (3 weeks). Here they are at the hospital after Eden was born: 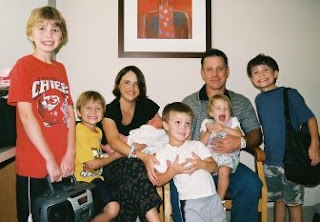 In August, we learned that Bryan was offered a job in California so they will be moving back to the Golden State in a mere two weeks! The added bonus is that they are moving to the town where my two brothers live (possibly just blocks away from them too), so it will make family get-togethers that much easier. Yeah, they're still going to be about four hours away (if traffic is good)...but, I'll take it. It's been over 1 1/2 years since I went to Kansas, nearly 3 1/2 years since they visited California and 5 years since my siblings and I were all together. (I think this is a photo of the last time that we were all together.) 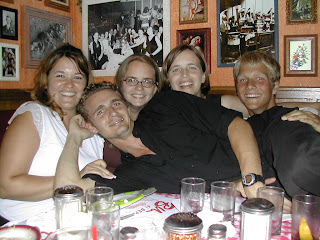 A family reunion is LONG overdue and is finally on the horizon!

Oh my! Look how much Kansas weather has aged me!

What exciting news, Janel!!!! I know how much you will enjoy being just a car ride away from your sis and all of your nieces and nephews.