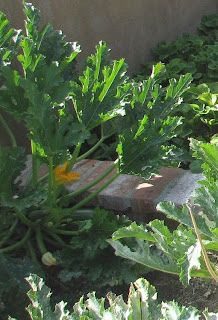 My father is, at heart, a farmer. He grew up working the fields on his family farm in Minnesota, and when he relocated to California and settled in the 'burbs, he started his own little "farm" right in his backyard. Throughout my childhood years, Dad worked planting corn, bell peppers, radishes and cherry tomatoes. Over the years, the garden has expanded to include other things like strawberries, green beans, Roma & salad tomatoes and zucchini. Ah, zucchini.
Technically, I think you're supposed to pick zucchini while they are still small and slender. (You know, about the size in the photo above.) But, somehow, Dad always manages to let a few go, or grow I should say, until they are humongous! Now, when I say humongous, I mean the size of a human infant! Seriously. Three years ago, my brother John took a cell phone picture of Baby Ella next to a zucchini that had grown and grown. From head to rump, they were the same size! (Unfortunately, I can't find that pic right now.)
Well, this past weekend, we went for a visit to see our parents. And lo and behold, Dad's garden had produced another such fine specimen of zucchini. This time, I think the zucchini was even LARGER, if that's possible, because it was Lucie-sized and she's older and bigger than Ella was. See! 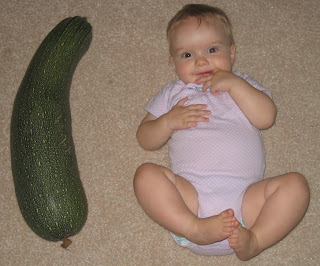 So, this week, it has been my mission to use up that zucchini!

The funny thing is, I STILL haven't used all of it. I've got a good five inches left! So, today I think I'll also make some baby food for Lucie. I don't think I'll be able to use all for baby food though, so I may have to get creative. Anyone else have good recipes for zucchini? You can post ideas in the comments section.

You can try feeding it to our cats...tho somehow I don't think they'd want much to do with it.