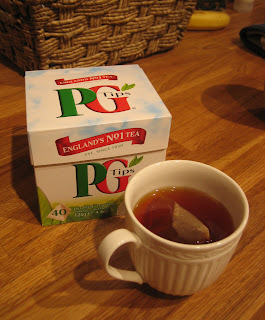 Every once in awhile, something brings me such delight I just want to share it with others. So, from time to time, you just may see a post that has nothing to do with our children or life in our little village. Yep, it may just be about something that I love. As I get older, I'm realizing the importance of surrounding myself with things I love...finding joy in even the simple things. Like a cup of tea. Excuse me, a "proper cup" of British tea.

If any of you have been to Great Britain, you probably know that those Brits love their tea and they're pretty darn good at producing it. Now, years ago I didn't really drink tea very often except for the occasional Good Earth tea. Then, I went to France and found an English roommate (or "flatmate" as she called it) named Janice. A couple of months after we moved into our cute little apartment, her parents came to visit and brought with them some "proper English tea". They brought a wonderful tea called Typhoo that came in these groovy little round teabags. It was soooo much better than anything I'd ever had at home! Now, by this point, Janice had become addicted to the strong French coffee, so she only drank the tea occasionally. So, that meant that there was that much more tea for me! I think I drank quite a lot of tea that year...especially since our apartment could get so cold in the winter. I have many fond memories sitting around the kitchen table with Janice or our friend Carmen warming our hands on hot mugs of tea! (Here is a picture of me and Janice when I saw her four years ago during a visit to London.) 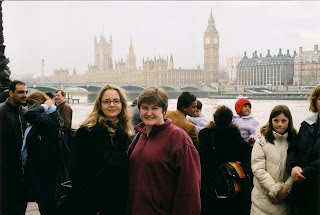 At some point, Janice introduced me to another brand of tea called PG Tips. I can't remember if it was after her trip home for Christmas or when she visited me in the States. But, I do remember being enchanted by their cute pyramid shape! And the taste! Oh, the tea tastes so good...especially with a splash of milk and some sugar. And according to their packaging, it is England's #1 tea!

Now, since my return to the States, I went back to college, started working, and became addicted to Peet's Coffee. So, for the most part, coffee has replaced tea as my drink of choice. But, every once in awhile, I get nostalgic for those carefree days in France and long for a cup of tea. Years ago, I discovered that World Market carried Typhoo, but now I don't live close enough to one to buy it on a regular basis. Our fancy, schmancy grocery store does carry decaf Typhoo at $5/box! But, I haven't purchased any since that is a bit on the spendy side and it doesn't have caffeine...and I need my caffeine. However, a couple of months ago, I was at another locally-owned grocery store in town and discovered that they carry PG Tips! At only $3.50 for a box of 40 tea bags, it is a deal compared to American teas I've seen at the store. True, it's not as cheap as Lipton, but I'm willing to spend the extra few cents because I love the taste (and memories) so much. So, now when I have a quiet moment when the girls are napping, I'll pull out that little box of PG Tips and fix myself a "proper cup of tea".
Posted by Janel at 11:26 AM