A few months ago, Brett & I decided to take our tax refund and remodel our kitchen. When we moved in four years ago, the kitchen seemed 1,000 times better than our 1970's apartment kitchen complete with an avocado colored stove. However, now that we've lived here for awhile, we noticed that our late 80's kitchen was starting to show its age. I think the cabinets were originally the cheapest of the cheap so now 18 years later the veneer was starting to chip off, drawers wouldn't slide easily, etc. Plus, the laminate countertop was starting to lift at a seam and the sink has lost its luster. So, we came up with a plan to remodel on a budget. Of course, we haven't exactly stuck to the budget but it should end up being a reasonably priced remodel considering what some people spend on their kitchens. Here are some "before" pictures of the kitchen. 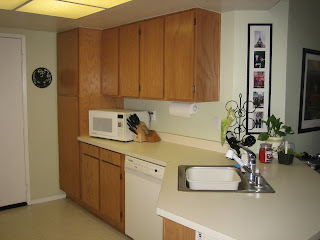 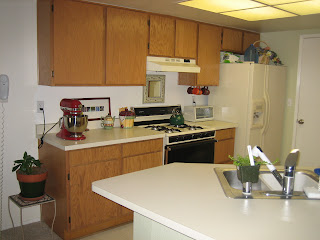 Originally, we had planned to update the cabinets, countertop, sink/faucet and stove. I hadn't even thought of lighting, but I've learned that the Piersmas are really into good lighting. They are also big fans of the dimmer switch. So, of course, Brett really wanted to get rid of the florescent lighting. We have a soffit that we could have taken out but that would have required far more expertise and work than we had/wanted to do. So, instead Brett (with some assistance from Papa Randy) did a lighting remodel that included:

We also purchased some under-cabinet lighting (with a dimming feature of course) that Brett will install once we're done with the cabinets. Here are a few pics of the finished lighting. They don't quite do it justice, but they'll have to do until you all can see them in person. 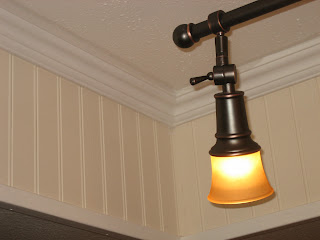 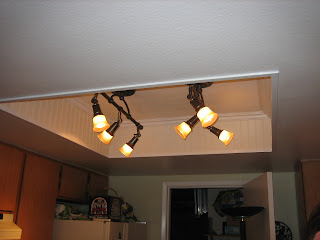 We've made significant progress on the cabinets since Brett got back from camp. However, they are not quite camera-ready yet. I'll do another post when we get further along. We're headed to a conference in a couple of days, so the remodel may drag on for a couple more weeks. I can't wait until I have a nice, new kitchen that I can actually cook in!
Posted by Janel at 1:14 PM