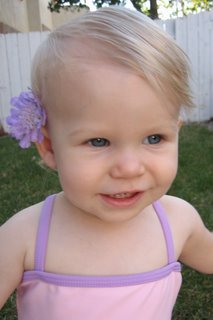 When Ella was first born, I practically lived on the couch because she was nursing about every 1 1/2 hours. So, I got to know the ABC TV line-up pretty well (it's the only station that we get since we don't have cable). Anyway, one of my favorite shows was (and still is) Live with Regis and Kelly. Last February, I saw that they have an annual Beautiful Baby Contest and I thought that I'd love to enter Ella in that when she was old enough.

Well, now it's time! The deadline for submissions is Friday and I've been trying to get a really good shot of her but without much success. Then yesterday, the Ireland family gave her a belated birthday present of a pink and lavender bathing suit. It is incredibly hot today so I tried it on her. Adorable! We went out into the backyard and she ran around while I tried my hand at photography. It's not easy to get a kid to look at you without anyone else's help. She was too enthralled with the leaves on the ground, dirt, rocks, etc. But, I managed to get one photo that I liked pretty well. I've posted it here for you to see. I think I'll submit this one to the contest.

The finalists and their parents get sent to New York City to appear on LIVE and to do a photo shoot that will appear in Parents Magazine. The winner gets to be on the magazine cover and gets $3,000 in prize money. I know the chances of Ella winning are pretty slim -- they have well over 90,000 entries. But, I thought it would be fun to try. They'll be showing entries all during the week of February 20th on the show. So, who knows, maybe Ella's photo will be on TV at least.
Posted by Janel at 6:57 PM