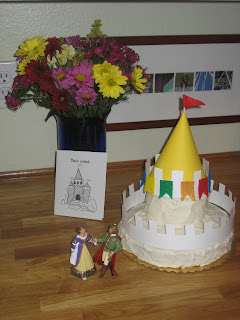 While my cakes are nothing compared to FishMama, I am trying to making them good enough to impress a 4-year old. Well, I think Ella was pleased the other day with her castle cake. It was relatively easy to make. I used a standard white cake mix and made some white frosting. I got compliments on the frosting and confessed to them that it was just the recipe off of the C & H Powdered Sugar box! I've tried various other homemade (and complicated!) frosting recipes in the past, but I like this one the best. Plus, it takes only a few minutes to make it in my trusty KitchenAid mixer. Can't beat that!

To make the cake, I used a 9-inch round pan and 2 mini Springform pans. I cut the domed part off of the large cake so that I would have a flat surface to stack the "tower" formed from the mini cakes. I ended up cutting the domed part off of one small cake as well so that the tower would be stable. I placed the large cake on a cardboard base, frosted it and then stacked the mini-cakes with a layer of frosting between them. To add stability, I placed a skewer through the center of the three cakes. Then, I completely frosted the cakes.

To decorate the cake, I made the "walls" with some white cardstock cut to look like a wall. I had to tape strips of cardstock together to make a large enough wall. For the top wall, I hot glued some felt flags to add color. Then to finish it off, I made a cone out of yellow paper and added a toothpick with a felt flag. If the cake had been larger, I think that I would have tried to add the plastic Queen & King onto the cake. But, they were a little too wide to fit on the first layer of the cake.

In retrospect, I might have dyed some frosting to paint doors/windows and added a drawbridge. But, I ran out of time and decided to keep it simple and hope that Ella would like it as-is. She did and that is all that matters!

If you're looking for more birthday cake ideas, be sure to visit FishMama's Birthday Cake Round-Up tomorrow morning!

Beat ingredients with an electric mixer for 2 minutes, scraping bowl often. For thinner consistency, add more milk a little at a time. Frosts one 8-inch, 2-layer cake.
Posted by Janel at 11:00 AM

Wow, you put a lot of thought into this cake. I think it looks great - and hey, the back-of-the-box frosting recipe turned out to be my Grandma's "secret" recipe as well. It's yummy!

You rock, as usual.

Thanks for the compliments ladies. I actually got the idea from an expensive Disney cake that they sell at the grocery store. I decided to add the flags since I made a big string of them to decoreate our house too. Jess, if you ever do a castle party, I kept the flags that you can use if you want.