Working Out with the 30 Day Shred

January and February are typically the coldest months here in Virginia. At least, that is what I've been told. Apparently, it has been a "mild" winter thus far but some of these days have been pretty cold for this California girl. It totally bugs me to see bathing suits in the stores already! Of course, the sight of bathing suits inevitably makes me think of my poor exercise habits. Like most people, one of my goals for 2012 was to get an exercise routine going. So towards the end of January, I bit the bullet and started exercising again.

I decided to start out with Jillian Michaels' DVD workout, The 30 Day Shred. I bought it over a year ago and have only done it a few times. There is a reason I only did it a few times. It. Is. Hard. 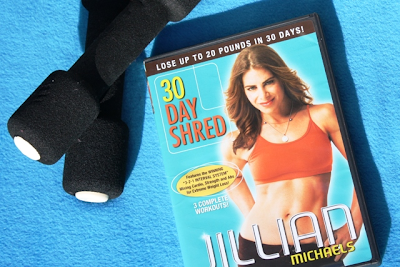 I'm not gonna lie...it is a tough workout! However, there are several things that I like about it. The DVD is broken up into three different workouts that get progressively harder. Each workout consists of three circuits. Each circuit has 3 minutes strength training, 2 minutes cardio and 1 minute abs. So overall, the workout only lasts about 20 minutes with a warm-up and cool down. It may only be 20 minutes, but you are working the entire time. For the workout, you do need some weights. I think she says to use 3lb weights, but I confess I'm too much of a wimp. I think mine are only about 1lb. But, something is better than nothing. I think I will go out and buy some 3 pounders as I gain a little more strength.

Honestly, the first day that I did it, I thought I was going to die in the first circuit. However, I realized quickly that the first circuit was by far the most challenging for me. (Yeah, I've always hated push-ups and probably always will.) Once I realized that, I just kept telling myself that the rest of the video would be easier. And now, each time that I workout, I tell myself that the next time will be easier. So far, I've managed to make it through eight workouts. Now, I don't look like Jillian just yet; but, I do feel much stronger and my abs are slowly becoming a bit more defined. Yes!


As far as price goes, the 30 Day Shred is pretty inexpensive. The DVD is only $7 at Amazon. You can also buy the workouts individually from Amazon Instant Video. Workout 1 is only $2, so you could get started watching it right away online. For me, I think it has definitely been worth the $7.

My exercise plan at the moment is to stick it out and finish all three workouts in approximately 30 days. After that, who knows?  I may repeat it (with heavier weights) or try one of the other DVD's that are languishing in my cabinet.

What about you? Do you have a favorite workout video or routine?
Posted by Janel at 2:49 PM