A Sunday in Athens 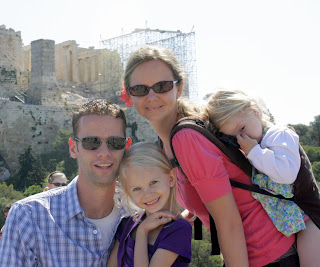 Now that June is almost here, I'm finally getting around to posting about our trip to Greece. Yes, nearly two months has passed since we departed for Greece. I guess I could just skip posting about it, but the family historian in me just can't do that. So, here over several posts, you'll get a glimpse at our first trip overseas as a whole family since Lucie was born.

We arrived in Athens, Greece on Saturday,  April 3rd. Greece is primarily an Orthodox nation, and the most important holiday is Greek Orthodox Easter. Typically, it is celebrated on a different Sunday that a traditional Easter. This year the two holidays happened to coincide. The Greeks begin celebrating Easter at midnight with a church service, fireworks and celebrating in the streets. Unfortunately, we arrived at about 7pm and were too exhausted to go out and see firsthand the celebrations. However, boy did we hear them throughout the night! 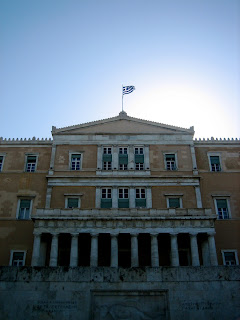 On Easter morning, we met up with our Elisabetta, NETC Tour Director and our local tour guide Thanos. Since it was a national holiday, all public sites were closed. However, Thanos still managed to provide us with an overview of the city. We began the morning with a driving tour of the city with stops at the Panathinaiko Stadium in downtown Athens and at the Tomb of the Unknown Soldier for the changing of the guard. 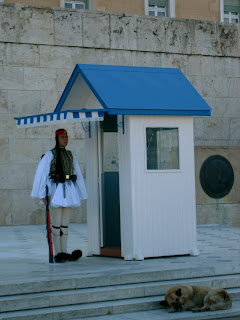 While we were entertained by the high kicks and pom-pomed shoes of the soldiers, Lucie was most interested by the "birdies" that were all over the place. 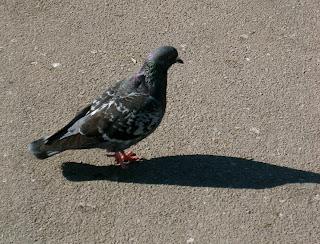 Then, we continued on with a walking tour of the area surrounding the Acropolis. One of the highlights of the day was the Areopagus, or the "Rock of Ares" (aka "Mars Hill) just northwest of the Acropolis. 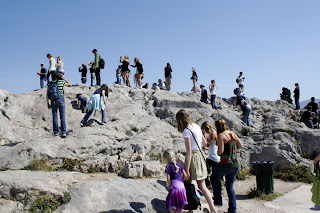 It is believed that the Areopagus is a site in Athens that the Apostle Paul visited and saw an altar dedicated to the Unknown God. Upon seeing this altar, Paul gave his speech that was recorded in Acts 17:16-34. Knowing the Christian historical significance of the place made our visit that much more meaningful on Easter morning. 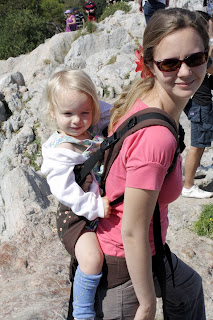 Although the climb to the top was rather treacherous because the rock had been worn smooth over the years, it afforded us with a wonderful view of the city. 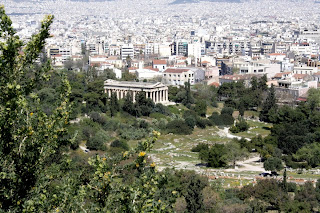 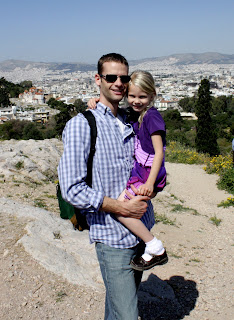 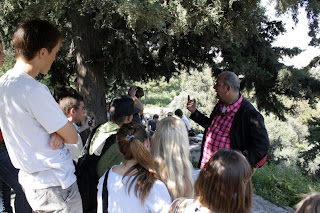 Afterwards, we walked down to "The Plaka," a very old part of Athens that is full of restaurants, shops and well, thieves.  We sat down for a kebab lunch on an outdoor patio with some others from our group. We were warned by the restaurant workers to beware of pickpockets as we were sitting along a busy walkway. Several men from the restaurant stood vigilantly watching for both customers and thieves. Sure enough, before lunch was through, several of the men chased after a thief who was attempting to steal from one of their customers. It made for an interesting show!

Then, it was back to the hotel for an afternoon nap for us all as we were still adjusting to the time difference and recovering from our travel and the festivities that interrupted our sleep from the night before. We had a nice dinner at the hotel and the girls enjoyed traditional Greek Easter Eggs -- hard boiled eggs that are dyed a deep red. (You can see a half peeled one in Lucie's lap in the picture below). After dinner, we headed back out for walk around the city and back to the Plaka. 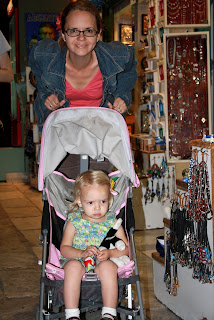 On our way, we were joined by a dog. Interestingly, dogs run loose all over the Athens. We had seen several during our tour earlier in the day, and they are out at night as well. 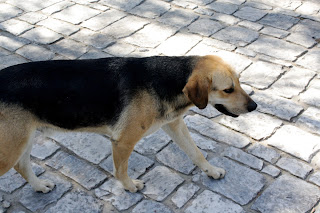 As Thanos explained to us earlier, these are dogs that have been abandoned by their owners. However, the Greek government has taken over their care. They have all their shots and are fed. They are well-behaved and almost serve as unofficial guides of the city. They spot groups of people and escort them through their territory. One particular dog joined us on our evening walk and even started barking at someone who dared to jaywalk across an intersection. These dogs know what they are doing! 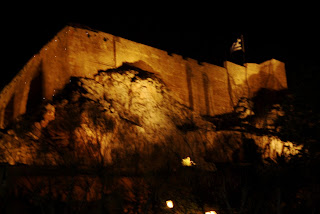 Like with most cities, Athens is beautiful at night. As long as it is safe to do so, you should always try to do some sightseeing at night. Seeing monuments lit up against a dark sky is always especially beautiful. After snapping this somewhat blurry photo (sorry, no tripod), we headed back for some more rest. The next day, we were headed out on our cruise among the Greek Islands! First stop: Mykonos.
Posted by Janel at 5:23 PM