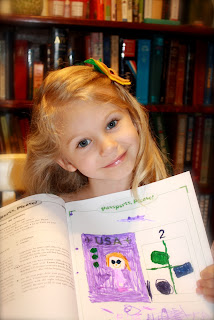 Being a former French major and travel-lover, it has always been a goal of mine to give my kids exposure to other languages at a young age. However, since I didn't grow up bilingual, it doesn't come naturally to me to teach them two languages simultaneously. Although my girls have both spent hours listening to a music and rhymes CD Baby's First Words in French as well as watching the Brainy Baby French DVD, they haven't picked up too much French - just a few words here and there. So, I realize that it will take much more effort on my part if I actually want them to learn French before high school.

About a year ago, I stumbled upon the Learn French Together system from Random House's Living Lanugage (they also offer the system in Spanish and Italian). The system includes three workbooks complete with lesson plans, three CD's, stickers and crayons. After I purchased the set, Ella was just interested in the stickers and crayons. Yesterday, I decided to try working on it with her again -- and Lucie even sat in on the lesson. We worked on basics like Hello, My name is..., I live in..., Goodbye and Please. Overall, I would say that it was a success! Since Tuesday is our least-scheduled day of the week, I hope to continue working on a new lesson each week. I think that it will be fun for all of us!
Posted by Janel at 10:30 AM

thanks for the tip. I've been thinking about being more intentional about teaching the girls Spanish. I'd love to learn French. Do you really think we could "learn together" or is it better for someone who has already had a background in French.

Personally, I think the "Learn Together" series is great based on what I've seen in the French version. I really don't think that you need to know the language previously to do it with your kids. However, as an adult, the speed might be a bit too slow for you if you really want to learn the language. The workbooks contain creative lesson plans and cover probably 5 - 10 words/phrases per lesson. As for the CD, the accents of the speakers are good, and some lessons include traditional songs. It's designed for kids age 4 - 8. Ella's 5 now and she seems to be grasping it. For us, I think we'll stick to one lesson per week and practice the words/phrases during the week. I'd love to hear how it goes with your girls if you decide to go for it!