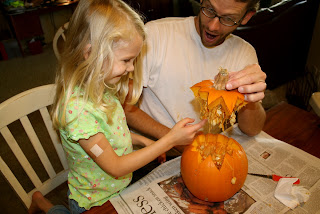 Yes, it is the 11th of November and I'm just now getting around to posting pictures of Halloween. This is just how things go sometimes. But despite the delay, I thought that it was important to post about it since this year we had three firsts -- my Dad was with us for Halloween, Ella carved a pumpkin for the first time AND Lucie dressed up and went trick-or-treating. Well, I guess last year Lucie technically dressed up, but I don't think it counts as "trick-or-treating" if your parents have to carry you and say "Trick or Treat" for you. 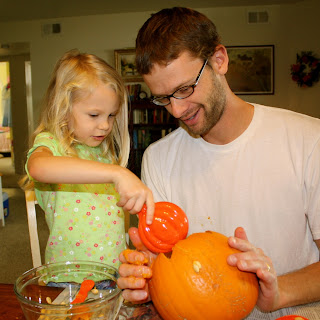 Ella went on a preschool field trip to the Pumpkin Patch and picked out her very own pumpkin. Then, on Halloween day, she carved it with her Daddy. She really didn't want to reach in and pull out the insides though. We finally convinced her to try using the scoop. 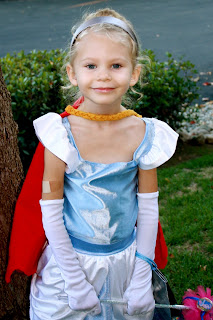 For trick-or-treating, Ella decided to be Cinderella and oh did she feel fancy in her long white gloves. I looked in every local store I could think of but to no avail. Then I happened to hear about CastlesNCrowns, an online store owned by my neighbor's parents. They had one pair left in stock! Ella was sooooo excited about that because she got to look like the "real" Cinderella. 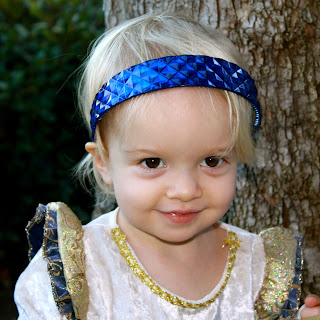 Lucie was a princess as well. Since she has had an aversion to wearing dresses in the past, I wasn't sure if she would go for it. But, she did. She also wanted to wear a "crown" (aka the blue headband). Before we left for trick-or-treating, we gave her a little tutorial about what she's supposed to do. I think she thought it was pretty cool when we put a lollypop in her bag. However, later when we joined some friends for trick-or-treating, she got a bit freaked out by Darth Vader and wanted Daddy to hold her. It took a few houses, but she warmed up to the idea again. She did not let go of her candy bag the entire time...no matter how heavy it got. It was really quite sweet.
Posted by Janel at 11:00 AM