Lucie is growing up!

In the last month, Lu has really changed! She has gone from a pretty sedentary baby...to a mobile girlie who is ready to explore! Once she started sitting up on her own, it was like a whole new world opened up for her. She started rolling around more to get where she wanted to go as well as sitting up and laying down on her own. She has also amazed me with her flexibility -- this girl basically does the middle splits...and can "pull through" them and onto her stomach. In all honesty, I don't know that a baby is supposed to be able to do this. It is one of my questions for the doctor when we see him for her check-up. A couple of weeks ago, she did start to get on her hands and knees. Then last week, she progressed to the "Army Crawl". She loves to "crawl" everywhere she shouldn't -- like under the desk by the computer cords, under the swing by the light cord. She especially loves to go where she hasn't really been yet. I've also noticed that she likes to stick her tongue out when she's on the move...she kinda looks like a cute little puppy dog with big brown eyes. See? 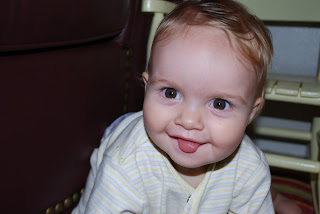 In addition to getting mobile, she's also getting teeth! Last Thursday, she cut her first tooth -- finally! I kept thinking that they were going to come in and then they never did. After a particularly grumpy couple of days, a little tooth finally burst through. If she is like Ella, this means my time of sleeping all night long has passed. (After getting her first tooth, Ella started waking up at least once a night until she weaned at 18 months.) Personally, I'm hoping that this is one area where she won't be like Ella!
Posted by Janel at 10:43 AM

Great post. Do you think her expertise at the splits might have something to do with that fancy baby holder thing you put her in? You might want to post that on some gymnast protege blog or something. Thats kinda cool. I cannot do the splits. I think I would break myself, if I even tried. So I won't try to learn now.

Jamie, I have wondered if it's the baby carrier has kept her flexible! That's the only way I can account for it. We've got a Dr. appointment on Friday so I'll have to remember to ask him about it. Just today, she was ASLEEP on her back and decided to do the splits in the air. It was just too funny!

She is too cute! Love the tongue!