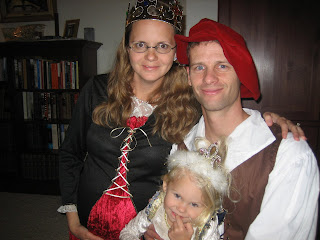 We've gone out trick-or-treating every year since Ella was born. In 2005, Ella was the 95 Theses (while Brett was Martin Luther). In 2006, she was a fairy. This year we all dressed up -- Ella was a princess, I was as a queen doing her royal duty (ie. carrying the future heir of the throne) and Brett was the artist Rembrandt. Ella absolutely LOVED her dress. I bought it last weekend and she didn't want to wear the crown. But, after practicing all week with it, she was fine wearing it last night. 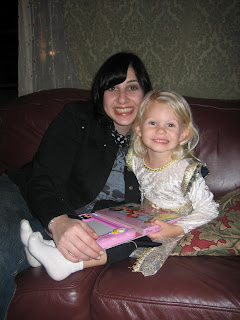 Last night, we had a special treat in that we got a visit from my college friend Jana. She was up from L.A. for a work-related trip to Santa Barbara so she drove up here for the evening. While I waited for Jana to arrive, Ella & Brett headed over to Los Olivos so that Ella could go trick-or-treating with our friends The Mullins. Jana arrived shortly after they left and then we headed over there too. Amazingly, Jana had never met Ella before which means it has been about 3 years since we've seen each other. But, Jana & Ella got along wonderfully. Jana also surprised Ella with a Disney Princess Drawing Book & Magnetic Sketch Pad. She is in love with the thing. She must have said "Oh, THANK you Jana!" at least five times throughout the night. Then this morning, she asked where Jana was and a few minutes later where her "drawing thing" was. Hopefully, it won't be another three years before we get to see Jana again.
Posted by Janel at 11:29 AM

Loved reading about our spending time together on Halloween and so touched that the "reveries" continued the following day! Wonderful meeting Ella and seeing all three of you! Thanks for making my Halloween so special!