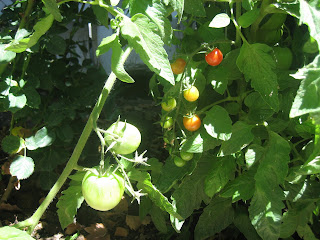 Last summer, Papa Jack came up to Solvang to help us plant some vegetables in our garden. We have a nice large raised planter that runs the length of our property. When we bought the condo, it was filled with rose bushes and other flowers with some empty space in between. So, Papa Jack suggested we try out some veggies in the empty spaces. Last year we had tomatoes, green bell peppers and zucchini. The tomatoes were the best!

Since we had so much success last year, we thought we'd try it again this year. In March/April, Brett bought some tomato plants from the Ag Department at the school and some strawberries from the store. Papa Jack contributed some zucchini and additional strawberry plants from his garden. We're not really sure what kind of tomatoes we've got -- the students who sold them said "The big ones are $3 and the small are $1." But, the tomato plants have taken off! Despite the cages around them, they have grown MUCH taller and need more support than the cages offer. They've actually fallen over under the weight of the tomatoes. But, what is really strange is that one of the "big tomato plants" has what appears to be two kinds of tomatoes on it -- regular salad size tomatoes AND cherry tomatoes! I've never seen anything like it. We haven't had too many red ones yet, but hopefully with the sunshine and hot weather, we'll have plenty of ripe ones soon. Ella is learning not to pick the green ones. Her daddy has taught her, "Tomatoes are supposed to be red."
Posted by Janel at 2:32 PM

That's an interesting plant! Wow! You could save some of the seeds and plant them next year and see if you could repeat it. Or, see if you can get a cutting of the plant to grow for next year. Very cool!