Last week we were down in San Diego for a conference that Brett needed to attend for school. It was a lovely week of doing nothing but swimming, shopping and getting some sun...at least for me and Ella. Uncle Jace even stopped by one afternoon for lunch and swimming. After the conference, we stopped briefly in Santa Clarita to see Grandma, Papa Randy, Nanna AND the Great Aunt Cass who was visiting from Minnesota. Now, it's back to reality and the neverending kitchen remodel. It feels like we've been doing this forever -- and I'm not really doing much work! Poor Brett has done the vast majority of the work thus far.

This Sunday, Brett's parents came up for the afternoon to help us make some more progress. Before San Diego we had finished painting the cabinet boxes, and Brett had installed some of the cabinet doors. It was enough progress on the cabinets that we could start cutting and installing the wood countertops. But, Brett needed some help with that so Papa Randy lent his expertise and Grandma even assisted with holding the countertop. I pretty much stayed out of their way and worked on cutting the shelf paper to size. Even that took what seemed like forever! 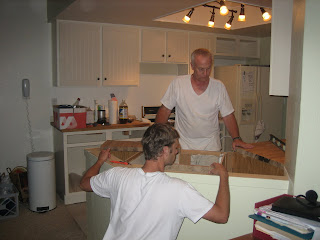 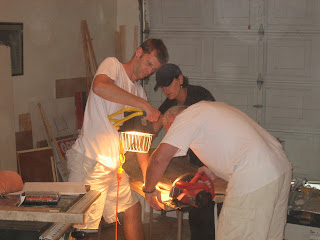 So, as of now the countertops are cut but still need to be installed. We needed to figure out what to do for the backsplash...none of the options we had previously discussed sounded like they would be the perfect thing. So, right now, we're just planning on painting the walls and then putting down some trim where the countertop meets the wall to cover up that small gap. Of course, it requires patching the wall a bit where the cheap laminate "backsplash" used to be. Right now, our patch job is drying as I type. Later tonight after Ella is in bed, I'll break out the "Highland Moss" green paint and the roller. We figure, if we don't love the way the wall turns out, we can find another backsplash option at a later date that works better. In the meantime, the painted wall will be better than a damaged one. So, if all goes well, Brett just may be able to install at least some of the countertops tomorrow. Once that is done, he'll be able to put the drawers in and more of the doors on. I think once that is done, we'll feel like we've accomplished something.
Posted by Janel at 11:28 PM