Here it is two months after our Italy trip and I'm finally getting around to blogging about the mid-point of our trip! On Day 5, we left early in the morning for a day trip to the medieval city of Siena in Tuscany. I had been looking forward to our daytrip to Siena because the tour books all raved about it. 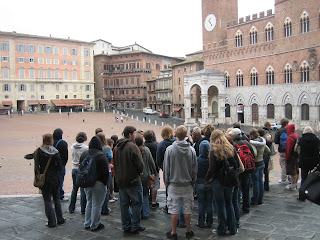 We began our tour of Siena at its fan-shaped Piazza del Campo. It is one of Europe's greatest medieval squares and sits at the heart of the city's 17 "contrade" (or districts). Residents of Siena are loyal to the "contrada" where they were born and rivalries between contrade are fierce. Twice a year, thousands of spectators flock to Siena to watch the Palio -- a bareback horse race around the town square. Jockeys and horses from ten of the seventeen contrade are chosen to participate in this wild race that lasts a mere 90 seconds. Each contrada has an animal symbol to represent themselves. You can see these symbols on flags and plaques throughout the city. 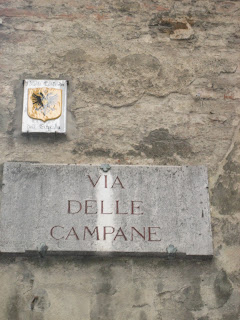 We then headed to the Duomo -- it is one of Italy's greatest cathedrals and stands out from many others because of its striped black and white pillars. The floor of the cathedral features several scenes in the inlaid marble floor. Several scenes were covered up to protect them but we were able to see "The Massacre of the Innocents". 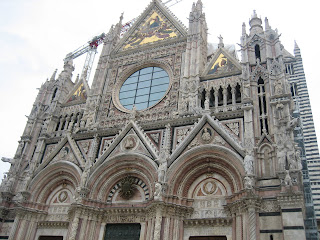 It was during this tour of the cathedral that the daytrip began to go downhill. Taking an exhausted toddler on a walking tour when she should be napping does not work so well. Brett took her outside when she started to act up and missed the majority of the cathedral tour. When we came back outside, she was passed out in his arms and he had a very disgruntled look on his face. Apparently she screamed and hit him for about half an hour before passing out just minutes before I arrived. Needless to say, Daddy was exhausted and needed a break from Ella. The tour soon ended and we grabbed a quiet bite to eat while Ella slept.

On the way back to Florence, our bus driver Francesco treated us to a brief stop at the Piazzale Michelangelo. It is one of the great Florentine viewpoints that offers an amazing panorama of the city. We quickly took a group photo and family photo and then headed back to Florence for free time. 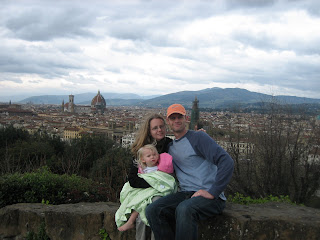 Ella & I retreated to the hotel for a much needed nap in an actual bed (her only for the entire trip) while Brett saw the sights of Florence with others on the tour. He climbed the steps on the Campanile (Bell Tower) and got a magnificent view of the Duomo. 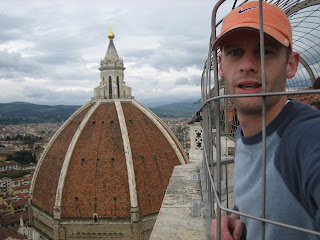 After our rest, Ella & I met up with the rest of the group for dinner. Thankfully, her stroller finally caught up to us so I didn't have to carry her all the way into the city center! Dinner was good -- it was our one evening meal that was not veal! We had pasta with meat sauce and some sort of a stewed beef and of course gelato for dessert. Then it was a short walk along the Ponte Vecchio until Ella became too fussy and we headed back to the hotel for the night. We needed some rest for our bodies and our spirits as we prepared to head off to Assisi and then Rome.
Posted by Janel at 4:26 PM