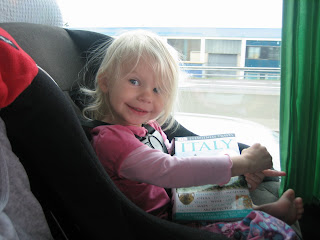 After more than 24 hours of travel, we finally arrived in Italy on Sunday, April 1st. Surprisingly, Ella held up amazingly well during the two bus rides and three flights. Unfortunately, the airline lost our stroller on the last leg of the trip -- who would have thought they would do that with something that you check at the gate! But, apparently it does happen.

Upon arrival in Milan, we met Rita, our EF Tour Director (an American from New York) and our bus driver Francesco (an Italian who didn't speak any English). We then learned that we had yet another 4 1/2 hour bus ride to our first hotel in Jesolo di Lido, a town on the mainland near Venice. We opted to skip the scheduled stop in Verona since we were all so incredibly exhausted and ready to find our beds for the night. That night we had dinner at our hotel -- first course: pasta, second course: salad & veal. This ended up being the meal that we had nearly every night of our trip with slight variations. The Italians must really love their veal!

That night I got a phone call from my friend Carmen. We met about 9 years ago when I studied abroad in France. She was a fellow UC student from Los Angeles who ended up being my roommate for a couple of months. After France, she moved to Italy where she met and married Gianluca, an Italian. I've seen them a couple times during the past few years when they've visited Santa Barbara, and contacted them a couple of months ago about meeting up during our trip. They live in Bergamo which is a 3 hour train ride from Venice. During the call, we made plans to meet up in Venice the next day during our free time.

Finally, around 10:00pm (30+ hours after our departure from home), we finally made it to bed. The next day our sightseeing was set to begin in the beautiful city of Venice!
Posted by Janel at 5:41 PM