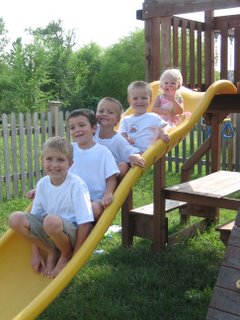 After more than two weeks, we are finally home! We went to Santa Clarita first to visit Brett's oldest sister Darcee, her husband Karl and their two children Brittney and Kameron. Although our time with them wasn't as long as we would have liked, it was fun to see them. Ella had a blast playing with her two oldest cousins -- she even learned the word "airplane" and now points them out whenever she sees one in the sky.

From Santa Clarita, Brett went to Sacramento for a teaching conference and Ella and I flew to Kansas City to visit my sister Jessica and her family. By the time that I booked the KC flight, I didn't have too many options in direct flights so we ended up taking a midnight flight. It was okay but I don't know that I would do it again if I had the choice. Ella slept on the drive to the airport but was wide awake when we got there. Then on the plane she was CRAZY! Not naughty, but just extremely hyper from her sleep deprivation. When I sat her in the empty seat next to me, she just started laughing hysterically. Fortunately, we had no one in front of us and the people behind us were amused by her antics. After about an hour and a half of squirming, laughing, pinching her Momma and throwing Momma's glasses in the aisle, Ella finally succombed to her exaustion and slept the other half of the flight thankfully.

Our time in Kansas was great! We got to see Jessica, her hubby Bryan and their four sons: Nile (9), Jordan (5), Cal (4) and Judah (2). As Jessica says, Ella was born to have brothers...or at least siblings! She had so much fun playing with them. Although she can hold her own with the boys, she was still very much a GIRL. She loved playing with the kitchen set in the basement while the boys had their sword fights. AND, she loved kissing and hugging her cousins -- she chased them around the house trying to give them some love. It was quite precious. Of course, that is not to say there weren't a few trying moments. She and Judah got into "Baby Battles" (as Nile dubbed them) every once in awhile. But, they both came away relatively unscathed. Poor Jordan got the worst of it. The night before we left, she smacked him in the head with a toy car. I'm still not sure if it was really agression or if she was just too tired and in her hyper/crazy stage as I wasn't there to witness it. Jessica commented on how much energy Ella has. Honestly, at home she does have her moments but I think she just really loves being with people and gets excited. She is definitely an extrovert!

We just returned home last night and are starting to get back into our usual routine. It has been a great but busy summer. It's hard to believe that in just two more weeks Brett will be back at school...but alas it is true. The summer is almost over! But, we intend to make the best of the last couple of weeks.
Posted by Janel at 2:04 AM