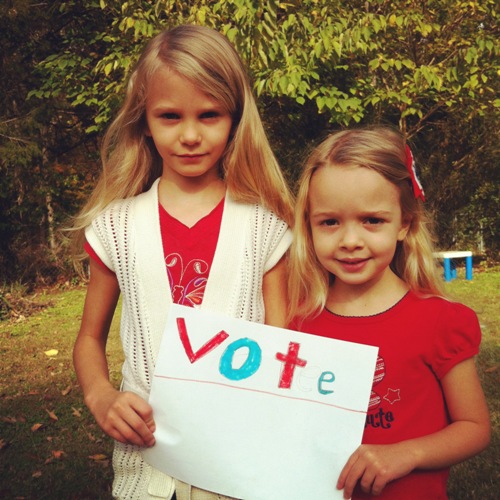 But hey, if you haven't yet, get out and vote! My girlies have the day off, so we headed down to the polls together. I really love that they are able to come vote with me and see what the process is like.

Although I won't miss the attack ads or folks banging on my door, I gotta say, it's been kinda fun around here with the presidential campaign going on. Yes, we had some action in our neck of the woods -- Mitt Romney announced his VP candidate in a nearby town, and President Obama had a "debate camp" right here in the 'burg. But, that's not the fun that I'm talking about. The real fun was right here in our house...teaching E about politics!

E is such a good reader that she can actually read the campaign flyers that have been delivered to our house. I didn't make her read them...she picked them up and did that all on her own. She is a rather passionate child, so I couldn't help but laugh at her response to the claims she read in the brochures! Oh, it was priceless! A sweet young child who doesn't understand how politics works just yet. She reads every word from campaign flyers and takes it as gospel truth. Man, was she mad at some of the claims that she read! It was a great opportunity to teach her about the different issues and how the major parties stand on them. We don't want our girls to parrot our beliefs, but we want them to really think about what they believe and why. So far, it looks like Ella is on that track, and we're proud of her.
Posted by Janel at 2:24 PM