Well, we survived hosting a party with about 20 or so law school students this past weekend! Although it was a bit of work to clean and prep soup for that many people, it was totally worth it. After much debate, I decided to make Tortilla Soup with Chicken (from Bon Appetit, October 2001) and Cheddar Soup with Broccoli, Zucchini and Carrots.

The food was good, but the company was great too. It was nice to meet so many of the people that my husband spends so much of his time with. As a mom, it was even nicer to see how many of them took time to get to know my kids. My girls were in heaven. They had adults talking with them, checking out their stuff -- and best of all -- dancing and singing Taylor Swift songs with them. Brett's friend Patrick even went so far as to don some of our prince dress-up clothes (from Ella's 4 year old Castle Birthday Party) and dance with Ella. His very sweet girlfriend played Ella's lady's maid and kept fixing her "dress" (made of a fleece blanket, ribbon and fake flower) for her. They were the last to leave that night, and they certainly made an impression on Ella. As they left, she yelled "Goodbye! I love you!" and then drew this picture. 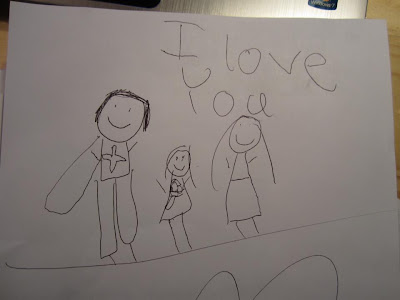 Later as she cuddled with Brett, Ella said, "Dad, today was the best day!"
Posted by Janel at 3:04 PM