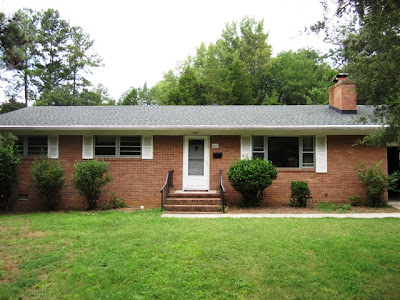 Yes, we are officially residents of Virginia. After a whirlwind (but great) trip to visit family and friends in South Dakota and Minnesota, the girls and I landed in Richmond on Tuesday night and ran into Brett's open arms. It is so nice to be reunited as a family!

We were all very excited to see the new place that we're going to be calling home for the next three years. Thanks to my husband and the awesome family that I married into, our house was mostly set-up for us. We're renting a three bedroom house with a HUGE backyard in a neighborhood that is very close to Brett's brother and his family who relocated with us. Really, I think that it is a great place for us although like most places it has a few quirks. So, I've spent the past two days trying to figure out where to put things and making lists of things that we need to fix some of the quirks. Honestly, it is sometimes paralyzing. It seems as if each project is contingent upon another one, and I have a hard time finding where to start. But, I'm sure I'll figure it out eventually.

Brett begins school next week, so we're hoping to at least get his office squared away and have some time to explore our new town before IT begins. I'll do my best to keep blogging...what a great way to procrastinate from the unpacking!
Posted by Janel at 2:01 PM