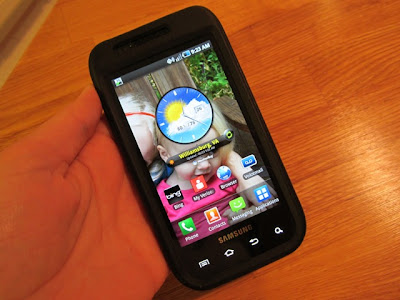 Brett and I spent the majority of last week in our soon-to-be new hometown in Virginia in a search for housing with my brother-in-law Troy, his wife Aimee and their 11-month old daughter Jillian. Since my brother-in-law works for Hilton hotels, we got a good deal on hotel rooms during our stay. However, since we booked a little too late in the season, the local hotels were full, and we had to stay about 30 minutes out of town. So, one evening after a LONG day of looking at housing options, we decided to skip dinner in a restaurant and just grab a bite to eat on the road. Jillian was quickly approaching bedtime (and a screaming fit), and we just wanted to get settled for the night.

So, we headed south towards the hotel with Aimee valiantly trying to forstall the overtired child from pitching a fit in the back seat. Our rental car did not have a GPS and we did not have an actual map, we relied on Troy's cell phone to direct us. Unfortunately, it was just a few seconds too slow in giving out directions so we missed our turns more than a few times. Somehow, despite his frustration and low blood sugar, Troy got us on a road going south and about 30 minutes later we were eating at a Wendy's in Newport News. Aimee stayed in the car to nurse the baby while the rest of us ate in the restaurant. As we sat there, Troy mentioned that our hotel was another 30 minutes away. I was a bit shocked by that news, and asked "Are you sure about that?" The men replied that they had put the hotel address, 151 Ottis (pronounced "Oat-tis"), into the phone and the location was on the other side of the bay. This time Brett got behind the wheel and Troy read the directions from the phone.

As we drove, we saw the sun set as we approached the bay. The route on the phone had us head into a tunnel going under the water. As we emerged, Troy reassured us that we'd be there in a few minutes. Expecting to see a tall hotel in the distance, I got the feeling that we weren't really that close. Troy called out directions turn by turn as we headed into an old housing development. "Are you sure we're going the right way? This doesn't look right." I asked from the backseat. Troy responded, "It's just taking us the most direct route. We're almost there." just as we're pulling into a cul-de-sac and a dead-end.

We were on Otis Circle. In Norfolk. About 30 minutes too far from where we were supposed to be. 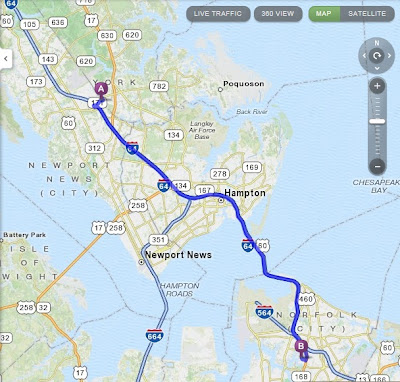 Apparently when the men put in our destination, one of them neglected to spell out the more unusal spelling of Ottis so the other one put in the traditional spelling of "Otis." The phone took it from there and automatically chose Otis Circle instead of Ottis Road despite the fact that there wasn't even 151 on Otis Circle. There's just a bit of a difference between the two, don't you think?
Posted by Janel at 9:00 AM