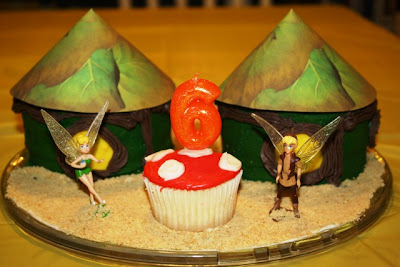 Once I got the inspiration for Ella's birthday cake from this Fairy House Ornament craft, I was really excited to make it. Originally, I planned on making a 4-layer tower and using one of the Tinker Bell "Polly Pocket" style figurines that we already had. However, once I found a set of tiny Tinker Bell & Terence figurines at Walmart, I decided to make two shorter fairy houses. Logistically, I just figured it would be easier to serve up a 2-layer cake than a 4-layer. Since I used mini-cake pans, I ended up making 12 cupcakes to supplement. The guests got to choose if they wanted a piece of the fairy house or a "mushroom" cupcake. It took me at least an hour to decorate it, but it was totally worth it!Here's how I did it:

What you need:
What to do: