All She Wants for Christmas Is Her Two Front Teeth

And it looks as if Ella will get them!

It feels as if it has taken FOREVER for her two front teeth to grown in. She lost them in late July and early August. I meant to post that story, but never got around to it. So, I thought that I would today. Who can resist pictures of a little girl with missing teeth?!

At the beginning of the summer, my sweetie looked like this: 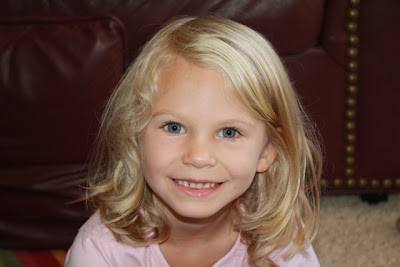 As the summer wore on, her top front teeth started getting loose. As with her first two, it took a long time for the top two to fall out. The first one decided to come out in July when Brett was on a missions trip to Guatemala. After watching (and grimacing) while one of them flopped around in her mouth for a couple of days, it finally came time that I had to pull it.

Oh, I didn't want to pull it. Never did I think that I would ever pull one of my kid's teeth. In my mind, that is Daddy's job! But, Daddy was gone and it needed to come out. Ella had bumped her mouth on the nightstand in my room, and her mouth was bleeding. So, the easiest solution was to just pull the sucker out. It wasn't an easy feat but somehow I managed it...after about 30 minutes or so. Despite being scared initially, Ella was elated when it was finally out. I suppose the extra buck I paid her for letting me pull it might have contributed to that!

Well, naturally, the absence of one tooth made for a lack of support for the other. Soon, the second tooth was flopping around in her mouth. For some reason, Ella forgot the elation she felt when the other tooth came out and was afraid of the other one coming out. She didn't want either Brett or me to come near her mouth. Despite promises of money...and even a much desired Ariel Doll, she would not cave and let us pull the tooth. After the tooth flopped around for at least a week, it's time had come. We were camping in Oregon, and frankly, the tooth was just getting gross. Ella couldn't brush it properly and didn't want us brushing them because she thought we'd knock it out. So, we did what I'm sure other parents have done...we pinned her down and pulled it. It took three adults to do the job -- Brett held her mouth open, I held her hands down, and Auntie Ray held Ella's legs with her knees and ever so gently wiped it out with a kleenex. She hardly even had to touch the tooth before it fell out. After the inital shock of how the whole thing went down, Ella was happy to have her tooth gone.

And we were all happy to see this smile. Boy, did she like sticking her tongue through the hole! 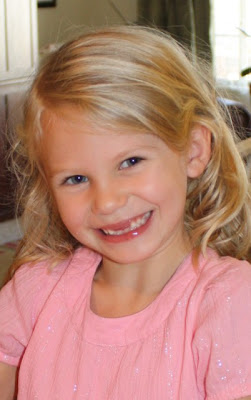 And now we're happy to see this one... 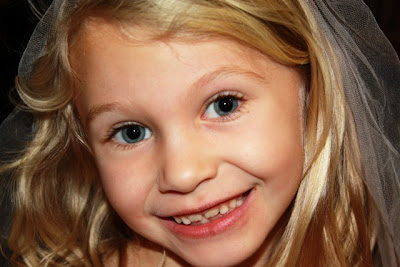