Rhodes & The Temple at Lindos

Fall is here, although it definitely doesn't feel like it. Summer has made its much belated arrival here on the Central Coast. Man, oh man, is it HOT! Like 110 degrees hot.

I guess it helps me feel not TOO bad about posting pics of beautiful summery weather. Okay, so technically, these are pics from the spring and our vacation to Greece. Yes, school is in full swing and I'm STILL writing about our Spring Break Trip. One day, I will finish documenting the trip. I am determined. Hopefully, it will be BEFORE our next Spring Break trip! Despite the delay, the pictures are just too pretty not to post. 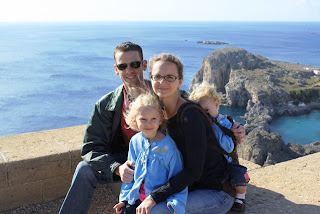 See what I mean?

I've posted about our visits to Athens, Mykonos and Ephesus & Patmos. Next on the itinerary was the island of Rhodes and an excursion to the Temple at Lindos. When we were buying Ella's necklace in Mykonos, the saleswoman told us that, in her opinion, Rhodes is the most beautiful island in Greece. I don't know that I would disagree.

Early in the morning, we headed off on a tour bus for our morning excursion. After being ill the day before, I was a little nervous as to what the day would bring. Thankfully, it turned out that getting some fresh air was a wonderful thing...and it was an exceptionally beautiful day. 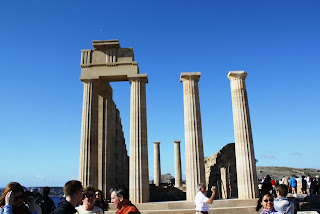 Our first destination of the day was the acropolis and the Doric Temple of Athena Lindia. The current archaelogical remains belong to a temple that was built in the late 4th century to replace an earlier temple that was destroyed by fire in 392 B.C. 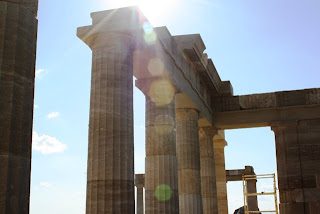 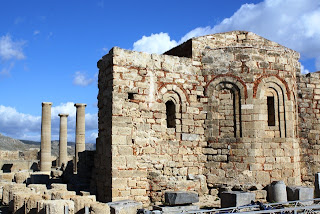 If you know your Greek, you know that "acropolis" is the highest point of a city. Well, they don't exactly have escalators, or even roads for that matter, up to the top of the acropolis. So, I was extremely grateful for our trusty Beco Baby Carrier. It is THE thing to have when you're traveling in Europe. Strollers aren't exactly the easiest thing to use when traveling over cobblestones and up stone steps to the top of the acropolis. Thankfully, Lucie loved to "ride on Mommy" as she calls it. 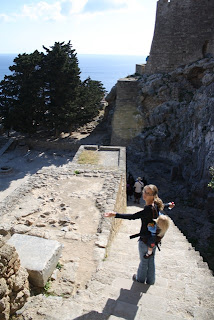 It definitely was a bit of a workout getting to the top, but the view was worth it! 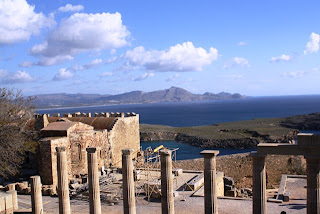 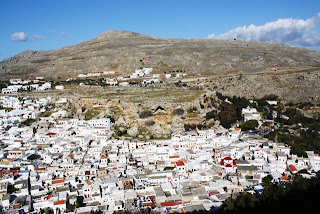 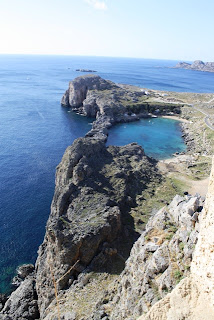 Ella enjoyed exploring the ruins and hanging out with her new "friends" (aka the sweet students who gave her some attention. 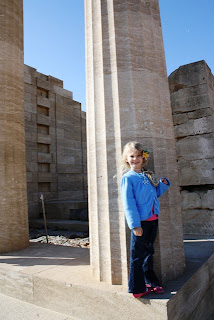 Lucie, of course, was more interested in the animals that she saw. There was actually a cat wandering amongst the ruins of the temple. 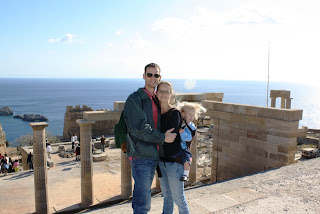 After taking lots of photos and enjoying the fresh air, we headed back down the winding path past many shops selling their wares. 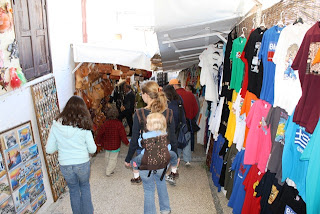 We managed to resist purchasing anything on the way down, but we did stop for some drinks at a cafe at the bottom. The girls and I enjoyed juice and 7-Up, while Brett got a rather attractive coffee. 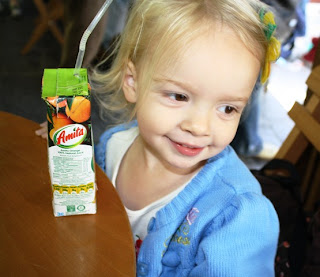 After another jaunt on the bus, we arrived at a local handmade pottery factory and store. I wish that I had video of the pottery demonstration. It was amazing! Having attempted to "throw a pot" back in Ms. Berge's art class, I have just a small idea of how much talent it takes. (Alas, I have no such talent!) In just mere minutes, this Greek man created a beautiful vase out of a lump of clay....and in just seconds, he destroyed it before our very eyes. A little voice inside me screamed at its destruction! But, he did this to show us the quality of his work and the even thickness of his pottery. Inside the store, a Greek woman painstakingly painted some of the finished pottery. 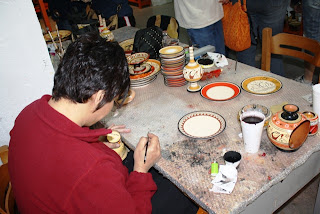 We couldn't resist bringing home a piece of pottery home with us. Thankfully, the store provided adequate wrapping so that our little decorative pitcher could make it home in one piece. 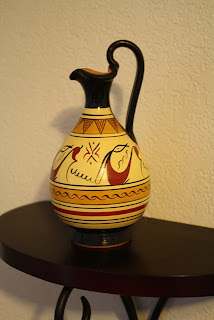 We ended our morning tour with a stroll through the grounds of the Palace of the Grand Master of the Knights of Rhodes. 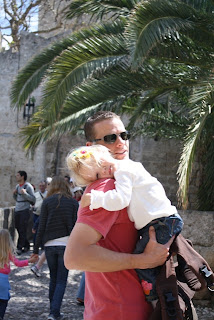 Situated near the harbor in Old Town Rhodes, the Palace was originally built in the 14th century but was largely destroyed in 1853. When the Italians inhabited the island of Rhodes in 1912, they rebuilt the palace in a grandise psuedo-medieval style as a holiday residence for Victor Emmanuel III of Italy and later Benito Mussolini. In 1948, Rhodes was returned to the kingdom of Greece and the Palace was turned into a museum. 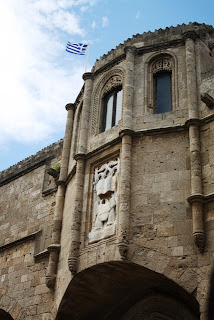 Our walking tour brought us back to the harbor and our cruise ship. We headed back on board for a poolside lunch and then headed back into Old Town to explore the shops. Brett, still hankering for a silk rug after his failed attempt in Ephesus, led us into a rug shop. I got to see firsthand the beauty of a silk rug just as Brett did in Ephesus. Depending on the orientation of the rug to the light, the colors of the rug can change. It almost seems magical. The saleswoman wooed us with discounts, cool beverages and compliments on the beauty of our children. After much debate, we decided to bring one of the silk rugs home with us. Although the rug was not actually made in Greece, it is a nice reminder of our time there. A silk rug is a luxurious thing to walk on, but we just couldn't bring ourselves to keep it on the floor as a rug. Instead, we have it hanging in our bedroom. 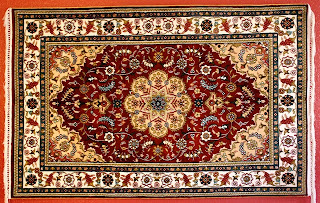 After our lengthy visit to the rug store, the girls were in dire need of some rest. So, back to our cabin it was. I settled down with the girls for a nap and hoped that dinner wouldn't be a disaster like it was the night before. Well, dinner wasn't a disaster...it just didn't happen. The girls WOULD NOT WAKE UP! Despite our efforts, they kept sleeping. Brett headed solo to the dining room for the evening and I kept on sleeping along with the girls. Amazingly, they slept until 5:00am the next morning and were refreshed for our busy day of visiting both the islands of Crete and Santorini.
Posted by Janel at 10:00 PM