A Tale of Two Teeth

For over two months, Ella has had TWO wiggly teeth. I was shocked the first day that she announced that one was loose. She's only FIVE...isn't that a bit early? Thank goodness that I didn't have to obsess over it too long. The next day she had a regularly scheduled dentist appointment, and they told us that although it was early, it was also just fine.

But man, were those some tenacious teeth! Last Friday, she lost the first one at school. I still haven't quite understood the details, but somehow she hit her mouth on something and it just popped right out. It made for quite a sight! Once that one was gone, the second loose one no longer had the support of the first and leaned like the Tower of Pisa. I knew that it's days were numbered and made sure that I took a picture right when we got home. 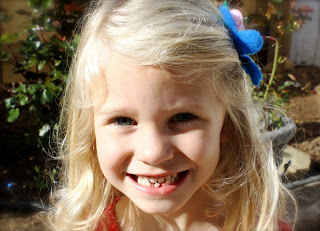 That night we put the tooth under her pillow and in the morning Ella discovered that the Tooth Fairy had taken her tooth and left a Golden Dollar coin in it's place. Needless to say, Ella was very excited.

Well, that second tooth was just hanging on by a thread...but it still stayed in there, leaning over comically. Until bathtime last night, that is. While I was trying to wipe spaghetti sauce off her face with a washcloth, Ella opened her mouth and I accidentally wiped that tooth right out! Ella was a bit startled but happy that the Tooth Fairy was to make another visit. Last night, the Tooth Fairy left another Golden Dollar Coin. 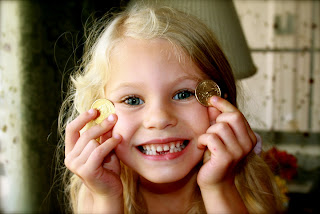 So, Ella has a two-tooth gap on the bottom of her mouth, two "big" teeth poking through, and is happily plotting what she can buy with two dollars!
Posted by Janel at 4:15 PM