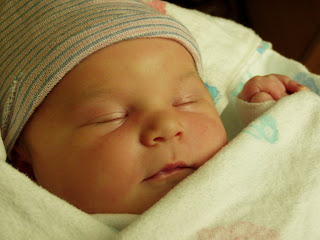 Thanks for sharing your story! I think it's fun to hear about labor experiences and how amazing our bodies are and the strength God gives us to get through it all! And I couldn't agree more...the nurses are amazing. I couldn't have gotten through it without them and my wonderful husband by my side. :)

You know, I like hearing other women's stories too -- it's like sharing war stories. However, after reading some other women's stories on Life As Mom and rethinking through my own, I don't think I'm quite ready to think about having another baby. The God-given amnesia hasn't set in just yet.