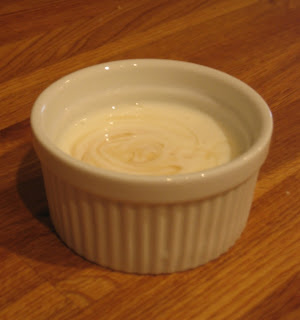 I just made homemade yogurt...and it is delicious!

I've thought about making my own yogurt for, oh, about 2 years now. Back then I was shelling out $4 for 6 small cups of full-fat YoBaby Organic Yogurt for Ella. The price made me cringe, but it was difficult to find full-fat yogurt...and man, was it good stuff!

Then, I watched Martha. It was The Baby Show with guest Jennifer Garner. JG was pregnant at the time, and I had a baby, and well, I just love Jennifer Garner so I HAD to watch. Together Martha and JG demonstrated how to make homemade yogurt. It looked so easy, and I really meant to try it. But then my ever-cautious sister suggested using a yogurt maker (for safety reasons) to keep it at a constant temperature...and those cost $30 - $50 which seems like an awful lot to spend and they're hard to find...and then most of them use hard plastic containers which may or may not contain those bad chemicals...you get the picture. So, I just never did it.

I did stop buying small cups of yogurt because I got obsessed over trying to avoid high-fructose corn syrup and it's pretty much in all flavored yogurts. So, for awhile now, I've been buying large containers of plain yogurt -- we just mix in jam or cinnamon/sugar to flavor it. But, I'm kinda particular about which plain yogurt I buy. Some are just plain gross. I've found that I do like Trader Joe's French Village yogurt, and yesterday we were almost out of it. TJ's is 40 minutes away and I wasn't planning on going there soon. So, I decided to just go for it since I had all the ingredients to make it. I checked Martha's website for the instructions and decided to do it in the evening so it could "grow" overnight. It wasn't very hard, but you do have to plan a bit ahead. It takes about 8 hours to "grow" and then needs to chill for a few hours more. But, I think it's some of the best yogurt I've had in a long time. It is smooth and very mild. It IS a bit on the thin side, so if you like thick yogurt, this might not be for you. (I did read that you can add dry non-fat milk as a thickener, but I didn't try that).

As I see it, the beauty of making your own yogurt is:

For those who are interested, this is what I did:

UPDATE 09/15/08: I recently made another batch of yogurt and tried a different incubating method. Instead of using the oven with the light on, I used my over-the-range microwave/hood. It has a "nightlight" underneath it that illuminates the stovetop below...and it happens to heat up the interior of the microwave to a nice 90 degrees. It worked like a charm!

Janel you Rock. I hate yogurt so I will not be making any, but I am glad you make such good and wholesome things for my neices! I am proud of you for being so innovative. Love you