The internet appears to be working again so finally I'm able to post about Ella's Birthday -- she turned three on Saturday. Since we're still adjusting to sleep deprivation, we didn't throw a party but we had fun nonetheless. Papa Randy came up for the day to celebrate with us and see Baby Lucie -- he hadn't seen her in three weeks. 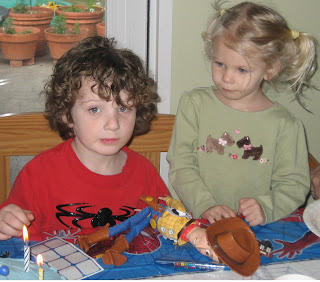 Shortly after Papa Randy arrived, we headed over to another birthday party. Ella's friend Harry was having his party (his bday was Friday), so we headed over there for a couple hours in the afternoon. I made the mistake of not preparing Ella for what was ahead...a party with OTHER children. It was her first experience at a little kid party. When we got there, they started a Blue's Clues hunt. Well, she doesn't know about Blue's Clues and got a bit overwhelmed by all the other kids. So, she headed to the playroom to play with Harry's toys for a bit. Later, she reemerged just in time for the pinata, presents and cake. At the party, Harry said, "Ella's my best friend!" It was very sweet. 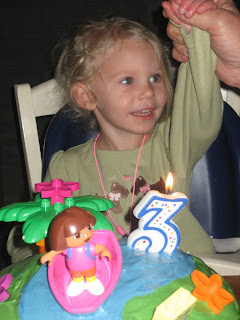 After the party, we headed home for naptime and found a special delivery tied to our door. Auntie Jamie had some balloons delivered just for Ella. The big mylar balloon was almost as big as Ella! Ella was very excited about them. That night, we had a tri-tip dinner at home. I attempted to make a cool cake like my sister Jessica does for her kids. Well, it wasn't quite the success that I had hoped. The frosting recipe I had was a bit too gooey which I didn't realize until I put it on the cake. Let's just say that it looked like an earthquake hit the cake -- the layers were slipping! But, it tasted good...and Ella like the Dora the Explorer decorations. 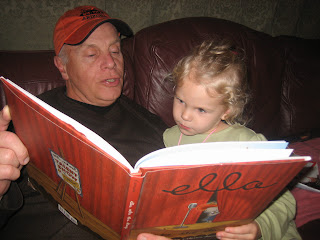 Like most kids, Ella enjoyed opening her presents...but boy did she take her time! She had presents from us as well as from some family. After opening each present, she wanted to play with each thing! It was nice that she wasn't acting greedy, but I almost fell asleep waiting for her to finish! But, given my lack of sleep lately, it doesn't take much for me to want to sleep. 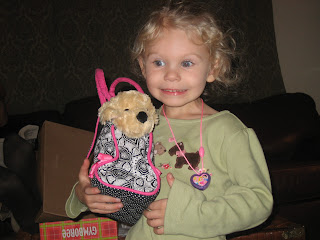 Janel, Ella's cake is lovely! The colors are beautiful. Good job! The pics are lovely. Ella is a cutie! Harry has great taste in friends! (:

I also think the cake is fantastic. I thought you bought it when I saw the picture. Good job!

Thanks Jess. Albertsons has a huge display of cool cakes and Ella told me she wanted one of those. So, I tried to create my own. You'll notice that I was very strategic in my photography. I didn't show the sides or layers of the cake -- the frosting was a disaster and the layers were slipping! But, I tried to make up for it with the decorations on top.