Today is Wednesday so that means it's Story Time at the library. I didn't know it but they had a special story time planned for today. Instead of just stories read by the librarian, we had a guest reader AND someone dressed up in a Duck costume. All of the stories were about ducks -- including one about a duck named Daisy. Ella actually knows the Daisy story because Nanna gave her the book a month or so ago. Afterward, they had cookies and juice on the patio and take-home coloring pages with a duck on it.

So, once we got home, I sat Ella down at the kitchen table with her crayons to color the page from the library. Although she loves to color, she has not yet learned to color in the lines and has not really every drawn anything discernible. Just recently, I did see her start to make a series of circles but that has been about it. Anyway, I left her in the kitchen to color while I started a load of laundry. When I returned a few minutes later, I was dumbfounded. On the backside of the coloring page, she drew a picture of a stick figure complete with eyes, nose, mouth, legs & arms! Although I was looking at it, I still couldn't believe it. But there it was in brown and blue crayon...and the blue and brown crayons were on the table. For a second I thought that perhaps some other kid had drawn on it before we left the library. When I asked her, she confirmed that she had drawn it. Upon thinking about it further, I KNOW that the paper was blank on the back because I remember seeing the backside at some point between the library and home. Plus, they didn't have any art supplies out at the library AND the sheets were fresh off of the copier. Ella caught onto my excitement and was pretty proud of it. I quickly grabbed my camera for a quick photo, and it was a good thing that I did. After I put the camera away, she promptly scribbled all over it. The explanation? I don't really have one. But perhaps she learned a few things from her Uncle Peter (the artist) during his visit this past weekend! 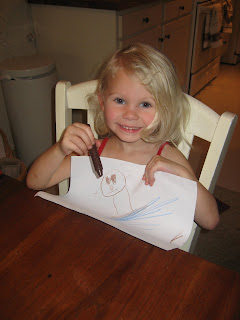